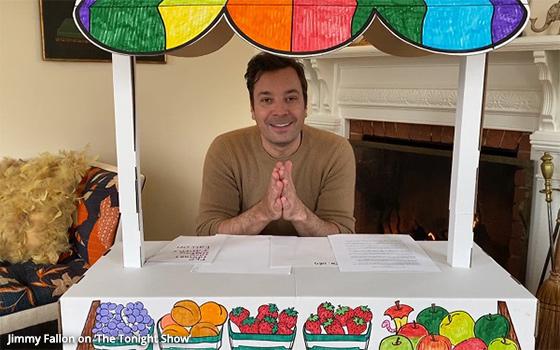 The décor was unexpectedly traditional. The cabinets were painted in a dull, dark blue hue that we did not care for.

Moreover, we both agreed that the stodgy interior on view seemed uncharacteristic of this particular weatherman, although we admitted we really knew nothing about this guy, or his tastes, his home or his private life in general.

And yet, here we were suddenly “visiting” his home on TV (and judging it) as he delivered a weather forecast. That happened to be the one thing we neglected to pay attention to, since we were so wrapped up in commenting on his surroundings.

Welcome to the new world of TV in which the late-night comedians, morning-show hosts and various news types -- from correspondents to weathermen -- have taken to setting up cameras and lights in their homes to deliver their monologues, news stories and weather forecasts.

Right off the bat, the good news is that for most of these at-home interludes, care seems to have been taken to actually set up the surroundings and make them reasonably attractive or serene for broadcast (notwithstanding the cabinet-color tastes of some).

These are not Skype-based productions, thank heaven. The images coming out of the homes of TV personalities such as Gayle King and Al Roker (to name just two of them who were seen this past Friday) have none of the cheap, grainy texture of webcam transmissions.

In many of these at-home segments, the degree of care that has been taken to frame the shots would appear to indicate that in many cases the objects and furnishings seen in the backgrounds were included on purpose.

Gayle King was seen sitting before a wall of framed photos, although it was not possible to discern who was in the pictures. Wild guess: Oprah Winfrey was in at least some of them. By contrast, the background in Al Roker’s house was notably devoid of personal items.

In addition to the news shows, the late-night hosts are all cobbling together their shows from their homes -- with writers and producers also hunkering down at their homes.

That's Jimmy Fallon in the photo above hosting “The Tonight Show” recently from what looks like his living room, and seated behind a makeshift desk that may have been put together by his two young daughters.

They have even been seen on the show, and so has Jimmy's wife. This is certainly different from the “Tonight” shows produced in NBC's studios at 30 Rockefeller Plaza where the temptation to turn the cameras on one's own family is virtually nonexistent.

However, this is what happens when a TV star's professional life melds into his private realm, and his own family members become props in his TV show.

Despite the number of TV types who are working on-camera at their homes, there are still some who are making the trek to work, perhaps in hired cars whose interiors have been thoroughly disinfected.

One wonders at times why some of these staffers have been required to report to the office or studio and others have not. Perhaps the networks and TV stations are leaving it up to each individual.

On one of our local stations, WPIX/11, co-anchors Tamsen Fadal and Kori Chambers are still doing the “PIX 11 News at 10” from the studios in midtown, but sitting a tasteful six feet apart from each other.

This makes for an unusually wide shot of their anchor desk, but the picture is easier on the eyes than a weatherman's blue kitchen cabinets.