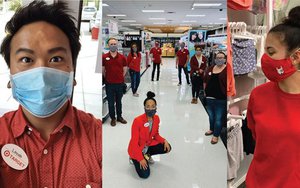 Tracking the vital signs of retailers during the COVID-19 crisis continue to be positively dizzying, as pressure builds for them to safeguard employees while still filling orders as fast as possible.

Balancing the two is getting increasingly complicated. Target, which just reported its ecommerce sales are up 275%, says it is extending its $2 temporary wage increase through the end of May.

It’s also extending other benefits, all part of the $300 million investment in wages introduced in late March. Those include access to reliable back-up care, as well as the offer of 30-day paid leave for workers who are 65 or older, pregnant or have underlying medical conditions.

In addition to the benefits extension, the Minneapolis-based retailer also revealed just how uneven the retail landscape is. Besides the massive gain in online sales, it says comparable sales have risen 7% so far this quarter, including a slight dip in in-store purchases, with a jump of more than 100% in digital growth.

Predictably, essentials, food and beverage have been the biggest sellers, up 20%. Hardline purchases have climbed more than 20%, while clothing sales have plunged 20%.

Target says sales began to surge mid-March, with in-store sales starting to soften as shelter-in-place directives took hold. Sales began to increase again mid-April, and so far, the month’s comparable sales are up 5%, with digital sales up 275%. Clothing sales, however, continue to nosedive, down 40% from the comparable period.

Some think the numbers show why Target is well positioned to prosper, despite the COVID-19 pandemic. “Despite the near-term profitability hit,” writes Peter S. Benedict, an analyst who follows Target for Baird, “we view Target as a clear longer-term beneficiary of this unprecedented disruption given their robust suite of convenient same-day fulfillment options and broad category assortment.” He continues to expect it to outperform competitors.

Walmart, which has also been seeing an onslaught of digital demand, is rolling out a new program in partnership with Nextdoor Inc., a digital hub that connects people with local companies and services.

Nextdoor members can use the app to ask for or offer help and makes it easy to set up contact-free delivery and payment options.

It builds on Nextdoor’s recently introduced “Groups” feature, which has seen the number of people looking to help one another jump seven-fold in recent weeks.

But as busy as companies like Walmart, Target, Amazon and Kroger are, other retailers are being pushed to the brink of insolvency. Neiman Marcus is reportedly days away from a bankruptcy filing, and JC Penney is said to be in talks with key lenders for bankruptcy funding.