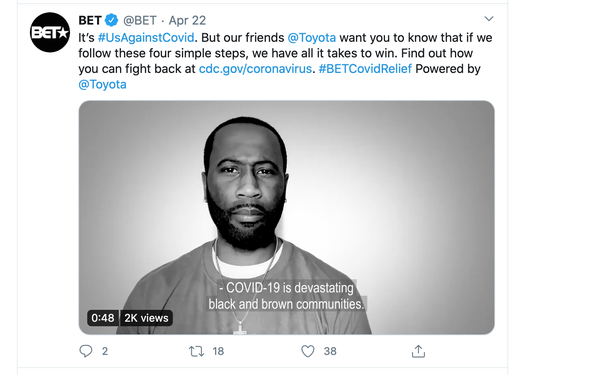 Toyota Motor North America is aiming some of its COVID-19 efforts at the hardest hit African American and Hispanic communities with a Community Service Announcement (CSA).

Titled #UsAgainstCOVID, it features high-profile African American and Hispanic celebrities including writer and actor Anthony Anderson, comedian Cedric The Entertainer and singer Lupita Infante. The spot share steps on how to avoid contracting the virus and directs viewers to the Centers for Disease Control and Prevention’s web site for more information.

The CSA debuted on BET’s social channels during "Saving Our Selves (S.O.S.): A BET COVID-19 Relief Fund Effort," which was broadcast last evening and will continue to run on Facebook, Instagram, YouTube and other digital channels through May 6. T

The CSA has 60-second and 30-second formats in both English and Spanish and was produced by Walton Isaacson for Toyota’s Social Innovation team.

According to CDC data, African Americans have been hospitalized at higher rates than whites for COVID-19. Several states also released their own data showing that African Americans are dying at disproportional rates from COVID-19. And in some major cities, more Hispanics per capita are succumbing to the illness than any other ethnic group.

More than $1 million in previously awarded funding to such groups as Hispanic Federation, Hispanic Scholarship Fund and the League of United Latin American  was reallocated to their COVID-19 response efforts.