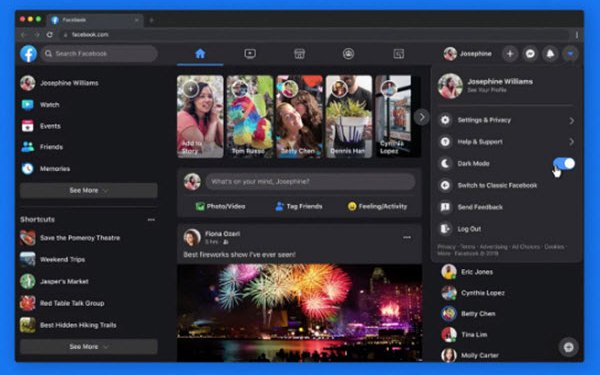 Facebook has now rolled out its redesign around the world.

The new version — which includes dark mode viewing and makes it easier to create ads, groups, events and pages — was announced at this year’s F8 conference, and became available in March in some markets, through opt-in.

“It’s faster, easier to use and gives your eyes a break with dark mode,” the company summed up in its blog.

The redesign, focused primarily on improving the experience of Facebook’s most popular functions — events, groups and messaging — has streamlined navigation for finding groups, videos, games and other content; faster loads of the homepage and page transitions; and a redesigned Messenger panel.

The new “groups” tab brings the user to a personalized feed of updates from groups in which they are members, and suggests other groups that might be of interest.

Dark mode, already found on Twitter and other social apps, is designed to reduce screen glare for use in low light and provide contrast for watching videos.

The News Feed, which has lost popularity over time, now emphasizes videos in an effort to drive engagement and support Facebook’s advertising.

“As I think about the future of the internet, I believe a privacy-focused communications platform will become even more important than today’s open platforms,” Zuckerberg wrote. “Today we already see that private messaging, ephemeral stories, and small groups are by far the fastest growing areas of online communication.”