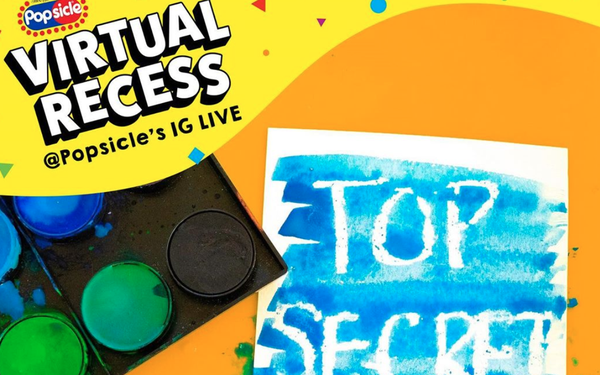 Having been invented by an 11-year-old, Unilever’s Popsicle brand stays true to its heritage with a series of 20-minute creative tutorials and activities for kids aged 6-12 called “Virtual Recess” on Instagram Live.

Today’s inaugural “Virtual Recess”—defined as taking a break from distance learning—was led by Left Brain Craft Brain’s Anne Carey, a mom blogger. It was designed to inspire families to play like spies by teaching them how to craft fun secret messages using common household supplies.

From her home in San Francisco, Carey explained how spies communicate information as viewers logged in from the United States, Brazil, England, Montreal and elsewhere. (Trolls being trolls, one viewer among the dozens of kids and parents commented about using Popsicles in a sexual manner—misspelling Popsicles in the process.)

The series will take place every Tuesday and Thursday until June 4.

“Popsicle believes that kids’ imaginations are their greatest superpowers and that imaginative play provides critical learning and development skills to help them thrive,” Russel Lilly, senior director of U.S. ice cream at Unilever, said in a statement.

In addition to Instagram, Popsicle is generating awareness for “Virtual Recess” on Facebook and the GIPHY social platform.

The company is also partnering with eight family/lifestyle influencers “who champion imaginative play with their families and are encouraging their followers to tune into Popsicle Virtual Recess each week,” a rep tells Marketing Daily.

Agencies involved in “Virtual Recess” are Edelman, Mindshare and U-Studio.

According to Unilever, the Popsicle was created in 1905 when 11-year-old Frank Epperson left a cup of soda with a stirring stick outside overnight and it froze. He called it an “Epsicle” and his kids would later dub it “Pop’s ‘sicle.”

The frozen confection was patented in 1923.