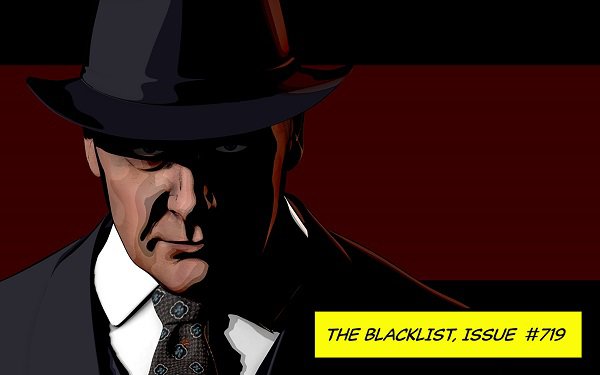 A long-running, live-action, prime-time series will end its seventh season this week in animated form.

Why? Because COVID-19 swooped in and closed down the production in New York about two months ago.

The show is “The Blacklist,” which ends its season Friday night on NBC with an episode that was likely never intended to serve as the season finale.

It is episode number 19, which is short of the customary “full season” of 22 episodes for network television (give or take).

With filming on this episode only partially completed when production ceased, the show’s producers decided to finish it in a novel fashion -- by rendering the portions they had no time to film in the style of a graphic novel (pictured above).

The end result will be an episode combining both live-action and animation. And once again, necessity is the mother of invention.

It is an axiom that is being applied all over the place these days when it comes to filling up the prime-time hours with new content.

This graphic-novel animation of “The Blacklist” may emerge as one of the more creative content innovations we have seen stemming from the pandemic and its restrictions on production.

Other innovations are not nearly as creative. One category of COVID-era TV content that has emerged recently is (for want of a better word) the “Zoom-inization” of television.

For example, the other night while grazing around the cable channels, an episode of “Deadliest Catch” turned up on Discovery that consisted of a host, Mike Rowe, conversing from what was likely his home with two other men who I believe were two of the “Deadliest Catch” boat captains.

They too were seen in each of their homes on this show, which basically consisted of three guys on video screens -- in a Zoom-like set-up -- swapping fish stories. It should go without saying, but this videoconference was a poor substitute for the real “Deadliest Catch.”

And while we are on the subject of poor substitutes, “Saturday Night Live” has been Zoom-inized too, with the show’s various performers cavorting idiotically in their homes. The shows are terrible.

In recent days, a number of pandemic-related news releases have appeared in my email in-box. At least one of them appears to be another Zoom-inized TV show -- “Impractical Jokers” on TruTV (otherwise known as the “Impractical Jokers Channel” since this is the only show they ever air).

This “Impractical Jokers” pandemic edition is titled “Impractical Jokers: Dinner Party.” From what I can decipher from the communique I received from TruTV is that the show will consist of the four jokers in each of their homes enjoying a meal together remotely via something like Zoom.

Tru plans on airing six half-hours of this. Maybe this show does not really exist. Perhaps it is just another one of the Jokers’ impractical jokes.

Other COVID-era content announcements have included: “Once Upon a Quarantime” (note the “m,” not an “n”) coming to Lifetime next week (May 20), a one-off special featuring four real-life couples who have filmed themselves during the pandemic lockdown.

And now, someone has put this footage together to form a TV show to be delivered via cable to millions of TV homes.

The TV Blog suggests using this show as “Exhibit A” when calling your cable company to demand a reduction in your cable bill.

With all due respect to these real-life couples, who I am sure did the best they could in their efforts to film themselves, it is clear that TV production is not only suffering in the pandemic, but we have reached the point where the shortage of TV content has become increasingly obvious on our home television screens.

Pretty soon, it will dawn on the people who run Zoom that they possess enough content by now to launch a cable channel of their own. Zoom Channel, anyone?