Eight Months After HBO, Hulu Offers Its Own Catherine The Great 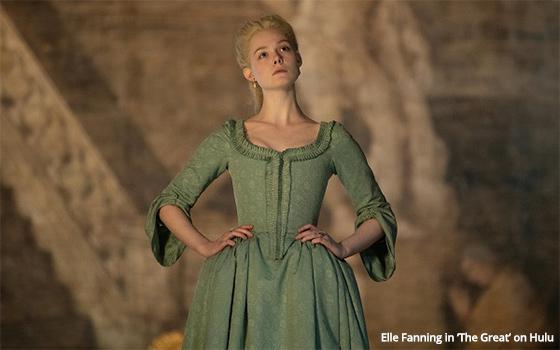 For the second time in less than a year, Catherine the Great is back on TV.

Technically, this new Catherine series takes place before she was great. Or at the very least, it starts out when she is quite young and newly wed (in 1745) to Peter III, heir to the Russian throne.

Nevertheless, the title of this new Catherine series is simply “The Great,” and it starts streaming on Hulu on Friday (May 15). Perhaps the question now is: If the young Catherine here is not yet great, then what about this series?

While the series does not quite meet the standard of “greatness” (whatever that is), it is very good indeed, at least based on the first two episodes that the TV Blog previewed this week.

That, in and of itself, is rare, since the TV Blog rarely makes time to watch a second episode of anything unless sufficient interest exists to tee up a succeeding episode based on the merits of the first.

This inclination represented a pleasant surprise because expectations were low at the outset of the “Great” previewing process. This was because, as usual, I began in my head to critique this show even before I saw it -- as critics often do.

I braced myself for a 21st-century “woke” take on the struggles of this teen-aged future tsarina. This is often how “history” is represented today -- in books, but also most frequently in movies and TV shows whose producers never hesitate to rewrite history in order to excite their modern-day audiences.

At least this new young-Catherine series admits right from the get-go that its take on factual history is specious. As the titles roll, the official title of the series carries an asterisk -- “The Great*” and then, in smaller print, “*An occasionally true story.”

How “occasionally”? That depends on one's expertise on the subject of 18th-century Russian history or one's inability to just enjoy a TV show such as this without caring whether it is true or not. I suggest taking the latter approach.

In the title role, Elle Fanning (seen in the photo above) does her best to play the young empress-in-waiting as an 18th-century figure, rather than as a woman of our time who just happens to be wearing the court attire of Russia in the mid-1700s.

She succeeds very well in the role as a young woman who enters into her arranged marriage with Peter III with teenaged hopes of romance and magic castles, only to discover quickly that her young husband is a sadist and a jackass (to say the least).

The grievous and emotional abuse she endures from her husband and the powerful men at court represents the best part of the storytelling that has been constructed for the series’ first episodes.

The result of all the terror she experiences makes us eager for her to take her revenge by whatever means necessary -- which was why I could not resist peeking at Episode Two after the first episode was over.

When seeing such scenes and hearing this kind of language, I ask myself the same old question: What would this series have been like without these elements? The answer: It would have been just as good, and possibly better.