Twitch Launches An Esports Directory, Helping Solidify The Line Between Esports And Gaming 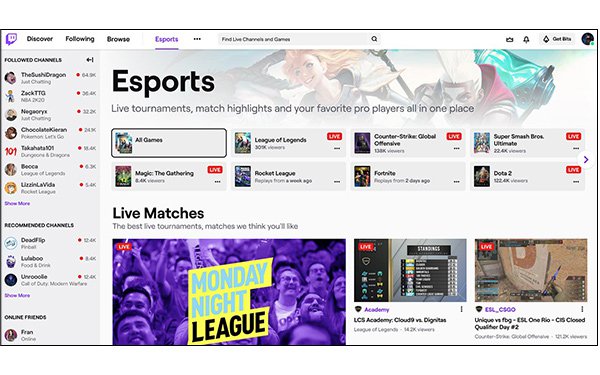 A few months ago, I sat down for coffee with Paul Brewer, SVP of Brand Partnerships at ESL Gaming, and asked him if he ever has difficulty making sure that he and the marketers he works with are speaking the same language about esports. He gave a little laugh and said to me, “you know, almost every client relationship I have starts with education around gaming and esports and how the two are different.”

To me and many others familiar with these industries, like Paul, this is no surprise. Most people think that people playing video games on Twitch is just as much esports as competitions held by publisher organizations and that Ninja is the face of esports, and that anyone who plays "Fortnite" plays esports.

The reality, however, is that esports is a segment of gaming that only includes professional, sponsored, organized competition, and that gaming in general is much larger (but not as eye-catching) than esports, and makes up the vast majority of content you likely read about.

Twitch has now created a whole separate category tab on its browser for esports specifically, which will certainly help clear up some confusion. Previously, esports broadcast existed under the title of the game being played, just like the rest of the content on Twitch.

This directory separates out esports replays and live matches by game, and also displays professional players who are streaming live -- helping to distinguish between popular recreational players and esports athletes.

This separation of content is extremely important, as it continues to demonstrate to those interested in the gaming and esports industries that there are in fact many degrees of separation between esports and gaming.

Most noticeably, the majority of content on Twitch's esports directory is replays and on-demand recordings, whereas the rest of Twitch's content is live.

Esports events, while they have attracted a large amount of attention from the mainstream media (most recently with NBA 2k League’s presence on ESPN), are much less frequent than recreational Twitch streamers, and only account for around 10% or less of the hours of content broadcast on Twitch.

So if you are confused about what esports looks like, head over to the Twitch Esports section and find out.

Sure, other things will likely confuse you once you arrive at the content, but so what -- enjoy the directory distinction!