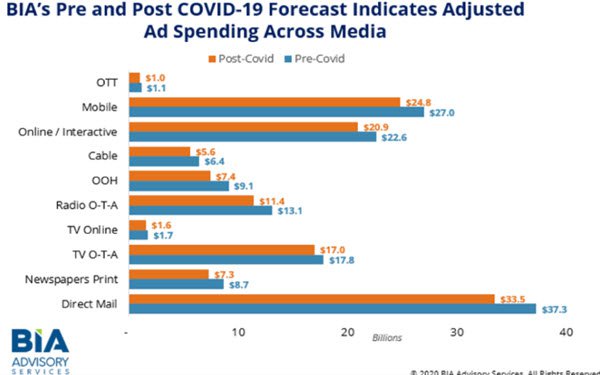 While overall marketing budgets have been hard-hit by the uncertainty surrounding the pandemic, local media buyers seem confident that continued advanced television exploration will be part of their evolving plans in the months ahead.

In a pandemic-oriented survey of 200 agency media buyers specializing in local and regional advertising conducted last month by Comcast Advertising, 80% said they intend to conduct do some programmatic buying, and fully 91% said they plan to put some of their video budgets toward advanced TV channels such as video on demand, over-the-top, addressable or advanced linear. (Respondents came from among users of Comcast FreeWheel’s Strata buying platform.)

“The events of the past few months have posed a challenge to many agency buyers — especially those who buy for local and regional businesses,” says Maria Weaver, chief marketing officer, Comcast Advertising. But the survey showed that these buyers “aren’t standing still,” she adds. “In many cases, they’re finding ways to be more efficient with their dollars through the use of data, targeting and automation.”

While 60% said it’s too early to tell how the pandemic will affect 2021 plans, 25% said they expect to explore new channels, 20% will look into new ways of using data, and 16% expect to change their approaches to targeting.

I also asked two experts to weigh in on the local scenario, and ATV in particular.

BIA Advisory Services, which just completed its first post-COVID-19 forecast adjustment, now estimates that the total local advertising market for 2020 will be $144.3 billion — down 10.6% from its original estimate of $161.3B in November 2019, reports BIA Managing Director Rick Ducey.

The forecast, which uses a methodology focused on connected TV, now projects $1 billion in local OTT spending, down from $1.1 billion originally estimated (above).

“This reflects downward pressure on market CPM pricing that the whole ad market is managing through, but we see promising take-up of CTV during the latter part of Q2 and into Q3,” Ducey explains. “We also expect CTV’s updraft to continue, and I expect that our next forecast update will reflect higher estimated spending growth in OTT.”

“There’s no question that the local market has been shifting toward ATV advertising, and COVID-19 has accelerated this shift. We hear from agencies that some of this will settle back into linear TV over time. But a good dose will remain with ATV, and ATV spend will grow at a faster rate than linear TV going forward.

“The positive effect on ATV spending is driven by several long-term and short-term factors, including high growth in CTV viewing, more data-driven audience targeting and activation, more flexible buying, better attribution, an attractive premium video environment, great uptake of ATV tech and use by consumers, greater ability to manage frequency capping, and the ease of programmatic trading. Still, traditional TV wins on reach, and on  some content — especially when the live sports and new productions are in normal mode.

“Buyers see the clear advantages of premium video ad environments. But they also want the options of forward reserve and RTB for activating buys based on the advantages they see in automation and data-driven audience targeting for driving optimizations and KPI performance," Ducey notes. "Broadcast TV is making progress, but must move faster to maintain competitiveness going forward. ATSC 3.0 — aka NextGenTV — can be a game changer here. Being able to measure, attribute and optimize cross-platform campaigns will be huge.”

One continuing obstacle to local ATV advertising’s progress, Ducey adds, is the control struggle within agencies.

“Since ATV is a hybrid, who gets the ATV budget — the traditional TV team or the digital team? Agencies and marketers are figuring this out, but as long as these silos exist, the opportunities will be limited both for clients and media.”

Alan Wolk, co-founder and lead analyst for TV[R]EV, is preparing an “Eyes on Local TV” report. It’s focused on how broadcasters are using their own OTT platforms and third-party platforms like Pluto and Tubi to extend their reach by using data to target viewers on those apps who would be missed in their linear broadcasts, he reports.

Importantly, broadcasters can now deliver unduplicated reach to avoid repeatedly hitting viewers who are on both linear and OTT with the same ads, he notes.

A key takeaway of the research: “The appeal of this setup for local broadcasters is that it allows them to sell the inventory themselves and not rely on third-party vendors,” Wolk says. “That allows them to keep their existing organization relatively intact, while expanding their offering to their customers.”

With normalcy out the window during the pandemic, Wolk is putting off budget predictions, and focusing on practical strategy.

“We tell clients we feel that the next year or two will be what’s being called ‘the Hammer and the Dance,’ meaning that different regions of the U.S. will open up and then shut down rapidly, and that will happen asynchronously,” he says.

“What we hear from advertisers is that they want to be ready for those shifts. So in addition to looking at the scatter market, they are looking at anyone who can deliver addressable advertising, because it can be targeted geographically, and you can also send different creative executions to different regions. As a result, OTT/CTV, which is all addressable, is garnering interest, as are the linear addressable ad-insertion platforms that Project OAR and Nielsen are creating,” Wolk says,

“We think this is true for local in particular, because brands are looking at local with fresh eyes thanks to the increase in ratings for local news, especially among younger viewers. It will be up to the broadcasters to prove that they understand this new ecosystem — some do and some don’t — and that they can help advertisers reach viewers who may have cut the cord for economic reasons and/or are just unreachable on linear TV.”