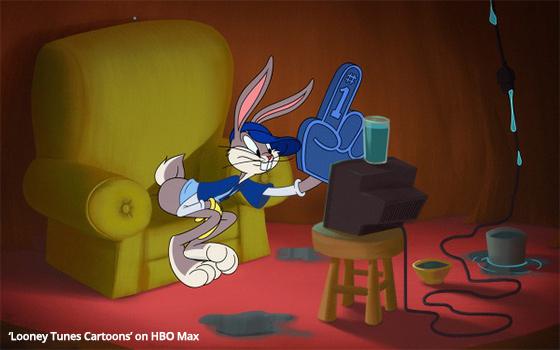 The suits at WarnerMedia might beg to differ, but the standout star of their new streaming service, HBO Max, is Bugs Bunny.

When perusing the list of original productions to be featured on HBO Max -- which launches Wednesday (May 27) -- it’s no contest.

The only other personality in any of the HBO Max originals with the same kind of mass notoriety as the wisecracking cartoon bunny is Elmo. And he’s a Muppet.

Bugs stars along with Porky Pig and Daffy Duck in “Looney Tunes Cartoons,” a series of new animated shorts that attempt to revive and mimic the breakneck visual comedy of the old “Looney Tunes” and “Merrie Melodies” cartoons.

Those Warner Bros. classics have proven to be so durable over the ensuing decades that they arguably form the most famous body of work ever to come out of Warner’s.

This is arguable because, among many others, Humphrey Bogart and James Cagney were both Warner Bros. stars. And Clint Eastwood has long been associated with Warner Bros. as an actor and director. So go ahead and argue.

The classic movies of Warner Bros. history happen to be part of the menu of offerings on the new HBO Max. So are a slew of vintage TV shows.

On the HBO Max home page, nine TV shows are listed under the descriptive phrase “culture-defining TV,” a designation that is also arguable.

These titles include “Friends,” “The Big Bang Theory,” “The Fresh Prince of Bel Air” and “Pretty Little Liars.” Of all of them, “Friends” might come closest to “culture-defining.”

But at the same time, I tend to avoid using the words “culture” and “TV” in the same phrase or sentence, since these two words would seem to have nothing in common.

However, in terms of sheer volume, the old movie and TV offerings on HBO Max comprise a formidable archive of content for a brand-new streaming service to make available for $11.99 a month (a limited time offer, according to the HBO Max home page).

HBO Max has all of that and HBO too -- from “The Sopranos” to “Game of Thrones,” and everything in-between.

The list consists of six titles, although a news release from earlier this year indicates there will be more.

“Looney Tunes Cartoons” (a woefully generic title) is one of them. Episodes are just over 11 minutes long, and consist of at least two cartoons, plus an interstitial sight gag inserted between them

WarnerMedia indicates that 80 of these will be available on HBO Max, but it is unclear how many are ready right now for this week’s launch.

The TV Blog previewed two of them this week, and they were dynamite (an explosive that makes numerous appearances in these new cartoon classics). The animation is on point, and so are the famous voice characterizations.

In addition to Bugs, Daffy and Porky, other characters seen in just these two episodes included Elmer Fudd, Marvin the Martian, and Yosemite Sam. If 80 of these are indeed on the way, then Foghorn Leghorn, the Roadrunner and Wile E. Coyote must not be far behind. Bravo.

Meanwhile, Elmo is starring in “The Not Too Late Show with Elmo,” his own talk show for kids in which he will interview real celebrities.

The other four originals are “Love Life,” a one-hour drama about a young woman’s love life starring Anna Kendrick; “Craftopia,” a crafts show for kids; “Legendary,” yet another fashion competition show; and “On the Record,” a series of documentaries that will be very serious and, as a result, no fun at all.

As for Anna Kendrick, she seems nice. But she’s no Bugs Bunny.