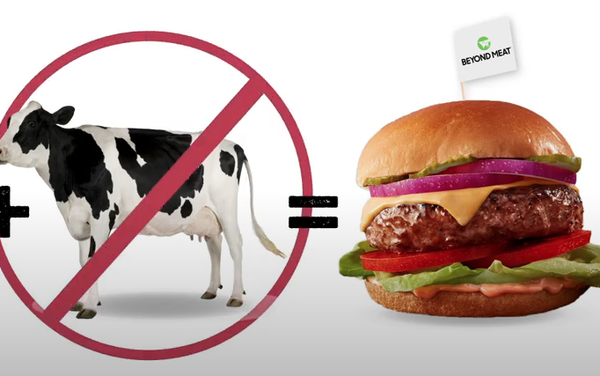 For marketers of animal-protein alternatives like Beyond Meat and Impossible Foods, marketing gains made during COVID-19 could be seen as one step forward, two steps back.

On the positive side, the temporary closures of U.S. meat processing plants due to thousands of sickened employees—and the resulting spike in retail price points of beef, chicken and pork—is providing an opportunity for meat substitutes to cut their prices. Along with taste, a premium price has been a major impediment to more widespread consumer adoption of plant-based foods.

However, these companies are very dependent on quick-serve restaurants. And while reopenings have begun, it’s too early to determine when “new normal” dining will emerge and what it might look like.

In the meantime, Beyond Meat now has a presence on Amazon Fresh and says it’s about to launch its own direct-to-consumer business—as it cuts back on some marketing activity while ramping up price discounting.

Beyond Meat isn’t saying much about its D2C initiative beyond noting the anticipated influence of its COO, Sanjay Shah, who spent seven years at Amazon prior to his appointment last September. It’s expected to launch in the current fiscal quarter.

“And are we going to become Omaha Steaks?” Beyond Meat founder, president and CEO Ethan Brown said during a Q1 earnings call on May 5. “I'm not sure. But…we're going to again try to reroute every way that we can to make sure that we're getting our product to consumers who want it.

“And online is obviously one big part of that. But I think you'll see the most, if I had to guess, the most traction right now…near-term out of Amazon Fresh.”

Beyond Meat appears to have one product available on Amazon Fresh: Beyond Beef Crumbles.

Despite the early impact of home containment on restaurants, Beyond Meat was firing on all cylinders in the quarter ended March 28. U.S. retail sales grew by 157% while foodservice rose 156%.

Now, it’s anyone’s guess how long the slump in restaurant traffic will continue.

“We can neither predict when or in what form normalcy will resume for our customers in this segment, nor when we'll see resumption of any expansion plans for our product lines for those QSR customers who are in trial or test phase,” Brown said on May 5.

A case in point is a test of Beyond Meat on menus at McDonald’s locations in Canada that took place between January and April—with no subsequent announcement from either company on the outcome. Asked about the trial by J.P. Morgan analyst Ken Goldman, company executives sidestepped the question.

“I can assure you there’s no issue with McDonald’s,” said Brown. “I can’t promise you that we’ll see a massive expansion tomorrow. But there’s been no change in information since we began this test and got good results in the beginning and got good results at the end.”

Marketing Daily reached out to Beyond Meat for additional clarity on its D2C initiative and the McDonald’s trial but had not heard back by deadline.

Both Beyond Meat and Impossible Foods have been steadily gaining retail distribution—the latter with nearly 800 additional supermarkets in California, Illinois and Nevada in April and more than 1,700 stores this month owned by The Kroger Co.

As of March, Beyond Meat was available in approximately 25,000 U.S. retailers and some 34,000 food-service locations.

“We expect consumers to gravitate toward plant-based protein options as they seek to support companies and brands that make a difference, not just a product,” BTIG analyst Peter Saleh wrote in a recent report.

Beyond Meat’s current “Why Go Beyond” advertising features celebrities and company investors like Snoop Dog and Kevin Hart talking about making a positive impact on their health and the environment by embracing plant-based products.