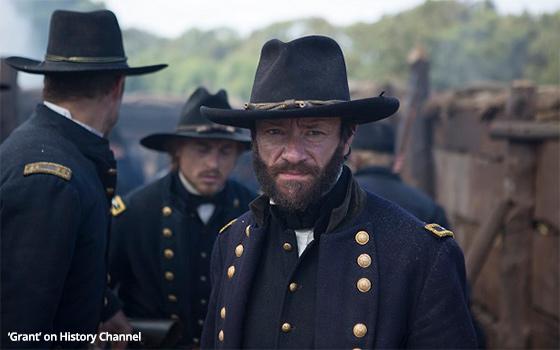 I checked in on the History Channel the other day and actually found something historical going on.

With all due respect to “American Pickers” and some of the other staples of the History Channel schedule, coming across a history documentary on this cable network with the word 'history' in its name is the exception, not the rule.

On the other hand, it is also reasonable to argue that a History Channel series such as “Ancient Aliens,” for example, does not qualify as a history show.

But there was no mistaking the history, or at least the intent of history, when coming across History Channel’s three-night documentary miniseries this week on Ulysses S. Grant.

The six-hour doc aired in three, two-hour installments on Monday, Tuesday and Wednesday nights. We joined it on Night Two as Grant was planning and then successfully executing the siege of Vicksburg (Mississippi) in the late spring and early summer of 1863.

It was a great story well-told, and the History Channel deserves thanks and congratulations for this three-night story of a great American with U.S. in his name (for “Ulysses Simpson”).

The scheduling was timely too -- teeing up this biography of the famed Civil War general on Memorial Day.

The History Channel did something similar in February with “Washington,” a three-night, six-hour documentary on George Washington that started on the Sunday night (Feb. 16) of the Presidents Day weekend, continued on the Monday holiday and ended on Tuesday evening.

However, nobody is perfect -- especially a TV network. Which is to say: The critic inside me does have a few quibbles with aspects of “Grant.”

For example, at times, the makers of this show laid on the battlefield violence more gratuitously than they had to. In this telling, much of the fighting was hand to hand, and the killing done with bayonets, rifle stocks wielded like clubs and fists of fury.

No doubt some of the Civil War fighting was undertaken in this manner, but this documentary would have us believe that all of it was.

In addition, much of this “documentary” consisted of newly filmed segments, including combat reenactments and dozens of scenes featuring Gen. Grant in consultation with other officers, meeting Abraham Lincoln in the White House and brooding alone in his tent or while gazing thoughtfully over the terrain of battle.

The actors -- such as the one who played Grant (pictured above) -- were not identified in the History Channel press materials.

Still, this type of mass-appeal history is better than none at all. Thanks to the History Channel, more Americans today know the story of U.S. Grant than knew it before.