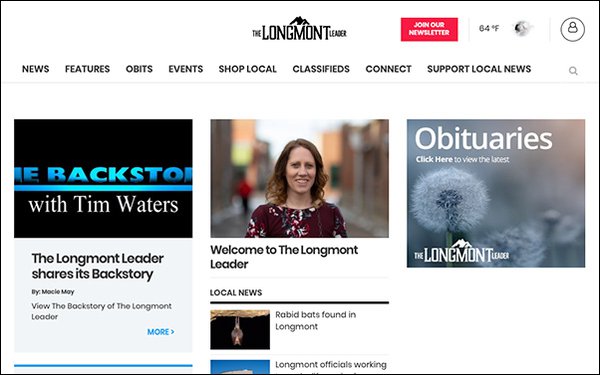 As part of its Compass Experiment, McClatchy has launched another local news site, in Longmont, Colorado.

Editor in chief Macie May wrote in an introductory post today: “My goal is to extend coverage in Longmont to include more topics that are important to our readers, to dive deeper into stories, to bridge the gap between cultures by sharing as many stories as we can, and by getting to know our neighbors even better.”

Mandy Jenkins, general manager at The Compass Experiment, told Nieman Lab in April that The Longmont Leader’s business will come from local advertising and sponsorships, along with reader revenue.

“It's been challenging to launch a new local news site during a pandemic with everyone working virtually,” Jenkins wrote on Twitter. “We have a lot still to build in Longmont, but today is a great start. Thanks to all who made it happen.”

Five jobs -- including an editor, business development leader, assistant editor and two reporters -- will be created. At least one of the reporters will be bilingual in English and Spanish.

Hiring a bilingual reporter will “ensure the news isn’t kept from part of our community due to a language barrier,” May wrote.

Coverage hours and days will also be expanded at The Longmont Leader, with weekend local news updates.

“I want to assure you that one thing I do not want to change is having a nonpartisan newsroom in Longmont, and the staff at The Leader are in full support of that ideal," May added in her post. "In our earliest conversations with readers in Longmont, we heard that’s something that’s important to you, too."