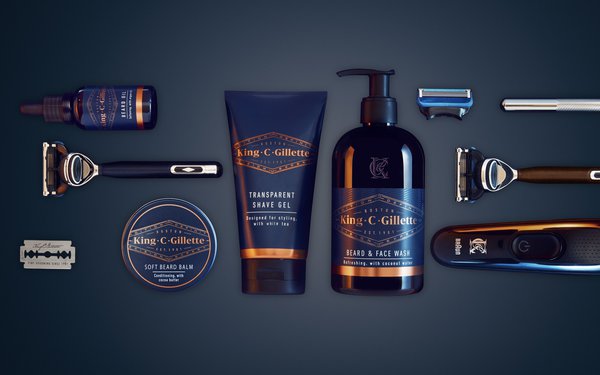 King Gillette also describes the company’s premier status in the razor world. But upstart companies like Harry’s and Dollar Shave Club, with hip ads and a strong online base, cut into Gillette’s kingdom not just with razors and blades but a whole suite of products that appeal to younger users.

A decade ago, Gillette lorded over 70% of the razor and blade market, according to data from Euromonitor. Now it’s about 50%.

In addition, the trend toward men keeping, and not shaving, facial hair hurt the brand, now owned by Procter & Gamble.

That’s a version of the Gillette razor that raked over millions of men’s faces for the entire 20th century before the single-edge Techmatic came around in 1965, followed by Trac II, Atra  and Mach 3. The King C. Gillette line also includes a “5-blade shaving and edging razor,” which seems to be a version of the current Fusion 5. The products range in price from $5.99 to $29.99.

“All men have their own grooming styles and rituals which are personal to them, and so we've put all our years of shaving experience together with the very best razor, hair and skin care technologies to create this full range of tools, accessories and care products to meet all the grooming needs of all men,” said Gary Coombe, Gillette’s CEO,  in a statement.

That new suite of King C. Gillette products may be Gillette’s entry into a new wider world of grooming in which the razor and blade is just the beginning. Harry’s and Dollar Shave Club have successfully marketed  a collection of men’s grooming products ranging from Dollar Shave Club’s  toothpaste, sunscreen and “One Wipe Charlie’s” (similar to baby wipes, for the same general purpose) to Harry’s “texturizing putty,” skin care products, body wash and boxer shorts.

Dollar Shave Club, a 2011 start-up and early success story as a D2C brand, was acquired by Unilever for $1 billion in 2016. Harry’s started in 2013 and was almost sold to Edgewell Personal Care, which also makes Wilkinson Sword and Schick razor products, in 2019, for $1.4 billion -- but The Federal Trade Commission blocked the sale in February.

King C. Gillette perfected a cheap, disposable steel blade and started his company in 1900. The company’s official history notes, that at the turn of the century, “Long beards were out while  clean chins and cheeks and a well-manicured  mustache were in.”  P&G bought Gillette, along with Gillette-owned Duracell batteries and Right Guard deodorant, for $57 billion in 2005.