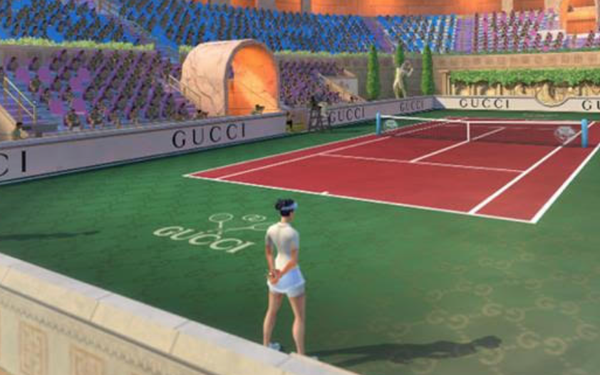 With Wimbledon cancelled and the future of the U.S. Open precarious at best, tennis fans might enjoy a distraction.

Italian luxury brand Gucci is partnering with Wildlife, a mobile gaming company, to make outfits similar to those worn by game characters in “Tennis Clash.” Fans will get the chance to wear the same gear as “Jonah” and “Diana.”

Players can also participate in an in-game tournament, the Gucci Open. The tournament is a limited-time game mode in which players will compete against each other with the goal of scoring the greatest number of points through a series of matches.

Gamers will also be able to use a Gucci-branded tennis wardrobe in the tournament. The wardrobe will include branded shoes, socks, headgear and clothing. Players can access the Gucci website through the Tennis Clash game to purchase their favorite looks.

Developed by Wildlife through a series of detailed physics studies simulating aspects of the game such as the trajectory of the ball, Tennis Clash offers a very similar experience to a real tennis match, attracting not only mobile gamers but also fans of the sport, according to the gaming company.

Players will put their skills to the test by choosing an athlete from a range of characters with different nationalities.

Tennis Clash is available for download on the App Store and Google Play.

Given the recent COVID-19 lockdowns, video games and esports have seen a rise in user engagement, according to the companies.

Gucci has already pioneered the relationship between the world of fashion and gaming through the Gucci Arcade games on the Gucci app.