The drop in pay-TV revenue is expected despite an increase in total global pay-TV subscribers of 35 million or 3.4% over that period, from 717 million to 1.06 billion.

Much of the revenue loss will result from subscribers converting from standalone TV to bundles in which they pay more overall to the operator but less on TV services, explained the firm’s principal analyst, Simon Murray. “Cord-cutting is also a major problem, especially in the U.S.,” he added.

Indeed, of the 61 countries expected to see pay-TV revenue declines, the U.S.’s projected loss is the most dramatic: down $31 billion, or 35%, to $57.4 billion. Canada and Brazil are each projected to lose about $1 billion. 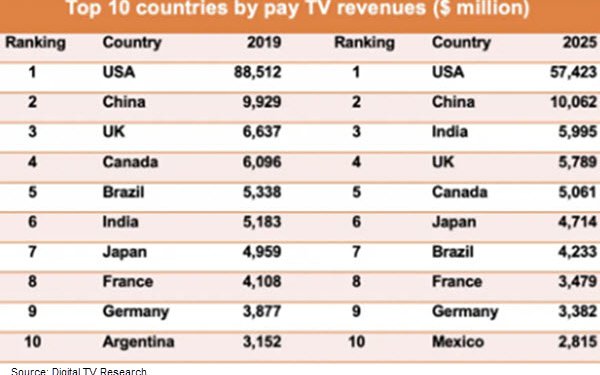 Looking at subscriber trends, the researcher now projects that global SVOD subscriptions will increase by 519 million, or 81%, to 1.16 billion over the five-year period. The total will jump by 170 million in 2020 alone.

The SVOD landscape will be heavily dominated by five global platforms, with combined paying subscribers totaling 640 million by 2025.

Amazon Prime Video is expected to grow to 141 million, but the HBO and Apple TV+ brands to just 25 million and 14 million, respectively.

China’s domestic players (no foreign platforms are expected to penetrate the country) will account for 23% of the global total by 2025. 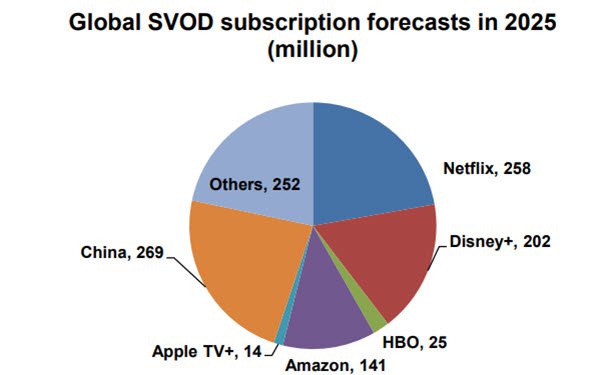 In the pay TV arena, combined subscribers (households) for the various types of digital pay-TV will continue to see strong growth. Digital TV subscribers shot up from 380 million in 2010 to 990 million at year-end 2019, and are projected to hit 1.06 million by 2025.

Satellite TV will lose 4 million subscribers in the same period, and see its share of total pay-TV subscribers decline from 21% to 20%. Satellite revenues will decline by $18 billion, including a $14 billion drop in the U.S. alone.

Meanwhile, cable TV subscribers will continue to drop. Combined digital and analog subscribers dropped 9%, from 530 million in 2010 to 484 million in 2019, and are projected to fall by another 11% to 430 million by 2025. By that time, analog cable will account for just 1 million subscribers, versus 429 million for digital cable. 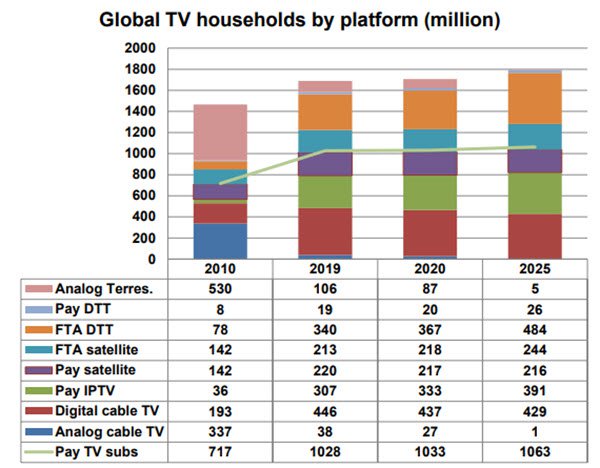