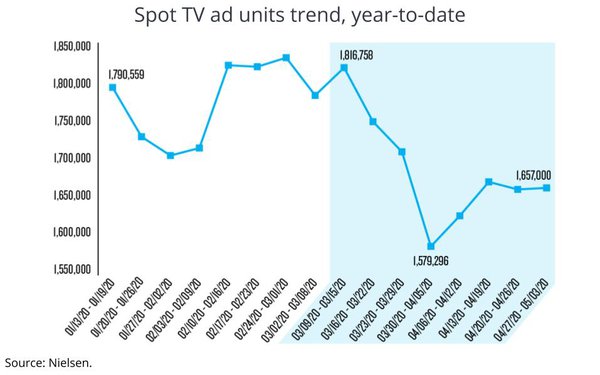 Local TV advertising has seen an uptick in the number of ad units. This follows the COVID-19 disruption that started in early March.

This number is still down from a recent high of 1.82 million, from March 9-March 15, just before stay-at-home orders began for many states.

In terms of advertising categories for local TV, retail marketers airing commercials saw an 8% uptick in advertising units (April 27 to May 3) from the month before; while automotive dealers added 31%; communications/public utilities were 28% higher; automotive dealer associations were 15% higher; and hotels/resorts saw a gain of 37%.

Overall, Nielsen says, a number of markets were up by double-digit percentages in terms of higher advertising units.

The findings: 101 out of the top 132 markets witnessed an increase in the number of commercials aired.