Vita Coco's Salute To A New York Institution: The Bodega 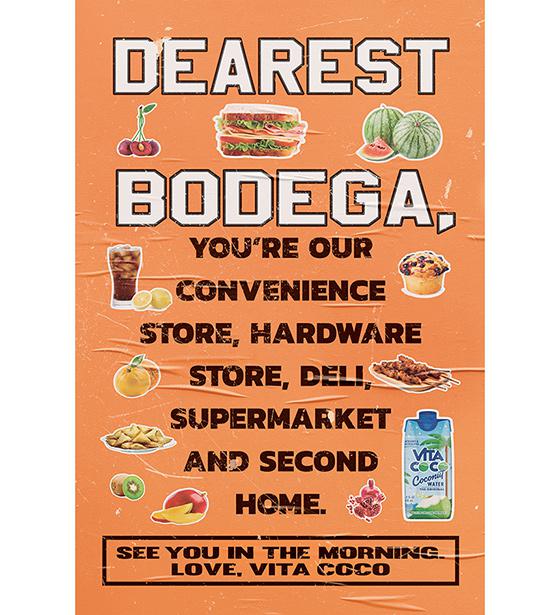 New York-based beverage brand Vita Coco was originally planning to launch a campaign this spring focusing on its Pressed coconut water line but pivoted in light of COVID-19 to instead use its contracted OOH media to support its New York roots.

The “Love Letters to Bodegas” campaign, developed with the brand’s marketing team and creative agency, Interesting Development, honors these NYC mainstays, a category of mom-and-pop grocery shops that has traditionally been a big source of sales for the brand, and a key part of NYC life. The sector has also taken a big hit with the shutdown of much of the city’s economy.

The agency designed the posters to emulate the unique, idiosyncratic look of bodegas. Each love letter starts with “Dearest Bodega” and closes with “Love, Vita Coco” along with various iconic bodega tokens, like the classic bacon-egg-cheese bodega breakfast special.

The campaign appears via OOH signage comprised of ads on phone kiosks and wild postings throughout Brooklyn, Manhattan and Queens, as well as window posters distributed directly to bodegas. The ads run through July 12.

To further amplify the campaign, Vita Coca is teaming with delivery app My Bodega Online to deliver the breakfast meal kit of Vita Coco Coconut Water and the BEC sandwich, purchased at local bodegas, to 5,000 local healthcare workers at six NYC hospitals.

Prior to the crisis, Vita Coco intended to launch the second year of its fully integrated Impossible To Hate campaign about the taste of its pressed coconut water.