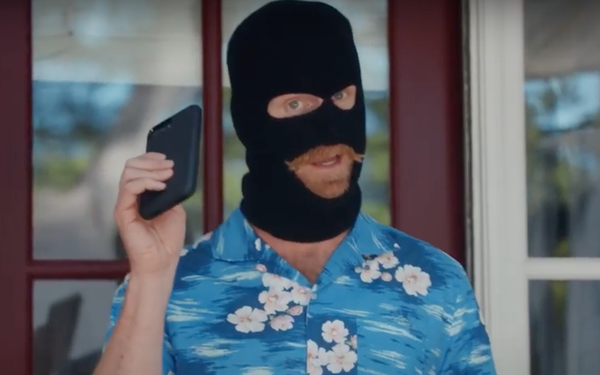 With consumers spending more time on home projects, SimpliSafe says sales of its security systems are surging, up 50% since the pandemic began. It has big plans for Robbert Larson, its masked spokesman. Don LeBlanc, the company’s new (and first) chief commercial officer, talks to D2C FYI about what comes next.

D2C FYI: You just joined the company a few weeks ago, and had been with Vistaprint for almost 10 years. What was the attraction?

Don LeBlanc: A big reason I joined is that the security market is a mission-driven business. It's about providing peace of mind for homeowners, business owners -- anyone looking to protect their family and property and sleep well at night.

And our business model is a little different. Traditional security players, like ADT, are much more hands-on, full-service. We are more of a do-it-yourself model. People buy us online or over the phone and install it themselves. There’s been a tremendous shift in people’s mindset, and they’re confident. They are comfortable with their own installation.

D2C FYI: Why is that? Is it because of companies like Ring and Nest?

LeBlanc: Yes. It’s a combination of people being generally more at ease with home automation and the internet of things. People are comfortable with robotic vacuums and automatic sprinklers. They've got this whole notion of connected homes, and security is one piece of that.

LeBlanc: It varies. In addition to preventing burglaries, people want smoke alarms and water detection. Once it’s all installed, people can forget it’s there. That is a bit of a marketing challenge -- the better the system works, the less people think about it. Once people turn the system on at night or when they leave, monitoring kicks in and they get alerts on their phone. If you’ve subscribed for professional monitoring, calls go to emergency personnel.

D2C FYI: Some people find cameras creepy, and there’s been lots of resistance to technology like Alexa and Google. How happy are people to be monitored?

LeBlanc: Our cameras are designed to protect customers from intruders, but not intrude on their private lives. They have a mechanical privacy shutter that, by default, is closed in "Off" and "Home" modes and open in "Away" mode or during an alarm event. And people don’t have to buy cameras. Lots of people just use motion and glass-break sensors.

People see us as a very independent, trustworthy entity outside of the big tech names. They see us as a stand-alone company and trust us to come into their homes.

LeBlanc: We’ve been in business 15 years and have a full-stack marketing solution: broadcast, print, digital, radio and podcasts. Many ecommerce companies tend to focus on digital marketing, but we’ve got a diverse portfolio, to tell our story in different ways. We get to do longer-form stories in podcasts, for example.

LeBlanc: That campaign launched last year. We think he's a great brand icon: a burglar so excited about our security system that he [uses it for his home] and recommends it to others. We're excited to continue to tell his story, build it out in different ways and educate customers about why our solution is right for them. We’ve got new creative testing right now.

LeBlanc: We see the U.K. as having huge potential for us. And while we’re not yet in Canada, we’re planning to expand there. We’re also looking at countries in Western Europe.

D2C FYI: Many D2C brands have opened their own stores recently. Is that in the cards for SimpliSafe?

LeBlanc: No. We work with a few retailers, including Costco. I expect that to keep growing. But I don't see us opening up our own shops.