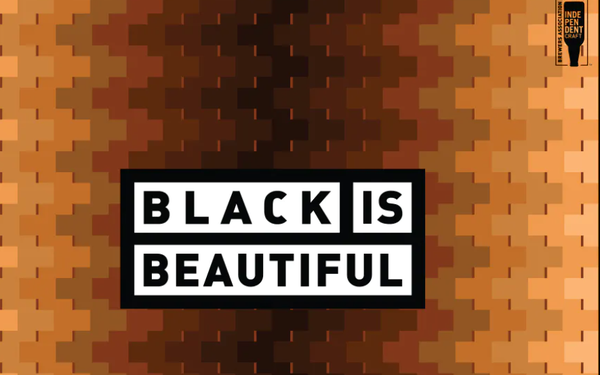 A Texas craft brewery co-owned by an African-American head brewer is launching a new beer called Black Is Beautiful, and has invited other craft brewers to use its recipe and add flourishes of their own.

Marcus Baskerville, the head brewer and co-owner of Weathered Souls brewery,  did not spend much time letting his project ferment. “To be honest, I had the idea on a Sunday night, and announced it on our website on Monday.”

So far, over 400 brewers have signed on to offer the beer they’ll be able to put in cans for distribution in their area.

Black Is Beautiful is an imperial stout beer, a type that is dark-colored. It should be ready for sale by various craft brewers some time in July.

Participating craft brewers will be encouraged to use the free logo, though it is designed to leave room for  other breweries to add their own insignias.

Weathered Souls has been in San Antonio for four years and is distributed around Texas. It also operates a bar/restaurant from its brewery location.

Black Is Beautiful is 10% alcohol-by-volume. That’s high for a beer, but Baskerville said that was at least partially because he wanted to make a dark and strong beer that would  “make a statement”  in support of the demonstrations that began in protest of the George Floyd killing.

He predicts that reaction to the beer "will be huge."

He could be right. A CNN story published Monday says Google Trends data shows the search term  “black-owned restaurants near me”  has skyrocketed since the end of May, and tripled between June 1 and June 2 as protests grew nationwide.

Weathered Souls is asking participating craft brewers to donate 100% of the beer's proceeds to local organizations that work on policing reform and legal defenses for victims of police brutality. It’s also asking those brewers to commit to “long-term” efforts for racial equality.

“Our mission is to bridge the gap that's been around for ages and provide a platform to show that the brewing community is an inclusive place for everyone of any color,” the Black is Beautiful website says. “We are asking for all breweries and brewers far and wide to raise a glass with us in unison and participate in this collaboration.”

In fact, the craft beer industry could stand some help in its own industry, where only a fraction of the workers are black, and few of the owners are.

Cooperative efforts like this one with other brewers is not an everyday occurrence, but this isn’t the first.

In 2018, Sierra Nevada beer offered its Resilience IPA to raise to help victims of the California wildfires. According to the trade publication BrewBound, more than 1,400 other brewers used the name and took up the cause, and it was similarly used in Australia when those fires erupted in 2019.

And just a few months ago, Other Half Brewing of Brooklyn introduced All Together, a beer offered to other brewers, too, with proceeds going to hospitality service workers like bartenders and waitresses who lost their jobs because of the pandemic. Over 700 breweries are now making their own version of it.