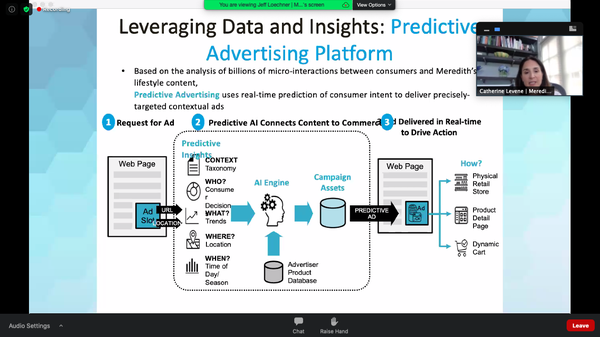 Read any good magazines lately? If so, they likely came from Meredith, the nation's largest publisher. If not, you probably will do so soon.

Catherine Levene, president, chief digital officer at Meredith's National Media Group, told our virtual Publishing Insider Summit audience on Thursday about the publications that it has just launched — Sweet July, Reveal, Magnolia Journal, and Millie. How, during this pandemic, does anyone launch a new print product?

It starts with data, a treasure trove of data, which Meredith has. "We look at data and find the white space in the market," she said. "We found there was a growing interest in personal finance, particularly for women."

Millie, which addresses this niche, will go digital in July. Where did they find an audience? They simply used their own assets, sending the publication to a million current subscribers to their other publications in April.

Meredith has been busy on the new product launch for a while, Levene told the gathered audience on Zoom. In the last two weeks alone, it has launched four podcasts, "Homemade "(from All Recipes); "Biscuits & Jam" (from Southern Living); "We Are Family" (from Parenting), and "Let's Go Together" (from Travel & Leisure). In the fall, it will launch a podcast from People magazine.

But where do they get the advertisers to monetize the products? "A lot of it goes back to data," Levene said. "The other is an approach to selling that is more consultative than sell, sell, sell." Meredith records micro interactions with its subscribers and consumers, then analyzes it to predict consumer intent by using proprietary insights and first-party data, including geolocation, time of day, the weather, and runs it through its AI engine to predict who the consumer is, where in the buying cycle they may be and what product they are likely to buy and from whom.

Then, using their campaign assets, they pull the exact asset down to the product level, show the resulting ad to the consumer in real time to drive action. They take their advertisers to the bottom of the funnel to focus on the consumer revenue business like affiliate marketing, promotion codes, magazine.com and marketplace. "We have integrated companies into the platform to beef up the consumer revenue business, which is up 75% year over year," said Levene.

She also talked about the company's proprietary taxonomy of 12,000-plus words (the average company has 600 or so), which they use to identify the intent of the consumer and direct advertising messages to them based on that intent. "If something on a page says lavender, our taxonomy will know if it's the scent, a paint color or a cooking item."

Meredith coined a phrase, COVID pulses, a week over week sharing with partners their customers intent, behavior, needs, worries, and anxieties. "We spun up a whole new taxonomy around COVID, health, products, how-to parenting, how to stay in shape."

As CPMs plummeted in the initial phase of the crisis, Meredith leaned into a new acquisition effort. "We were acquiring new customers for 30% less than what it cost us before. We can monetize them in the short and long term."

Although the crisis meant the company's studios were closed, they were able to create simpler videos, some of which were obvious, like how to make a face mask and some not obvious at all, she said. "One of our biggest videos came from Travel & Leisure, a site that spun up video on virtual museum tours. It was a huge, huge hit. That video alone made our month in terms of video."

Looking back, Levene said she did not know that the company could be so productive, so fast, working from home. "Communication is key during this time. We over-communicate."

She left the audience with two noteworthy thoughts: the use of data and the ability to adjust strategy based on it, and the notion of developing long-term relationships with marketing partners. "We are signing multiyear, multimillion-dollar joint business with partners."