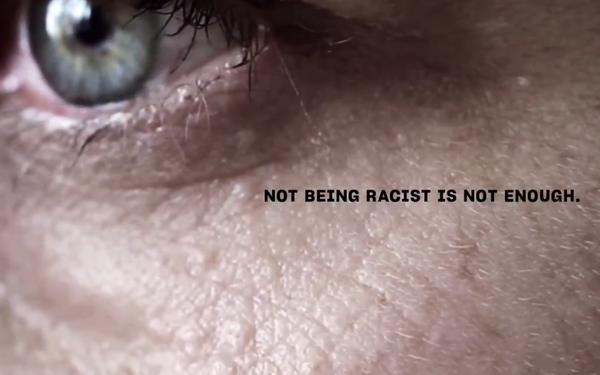 Procter & Gamble, which already created two unstinting short films about racism, has released a third one, “The Choice,” that implores all Americans to actively fight racism.

“Not being racist isn’t enough,” the 75-second ad asserts. “Now is the time to be anti-racist. Words and feelings are not enough….Choose action over observation. Choose progress over perfection.”

The message isn’t spoken, but is displayed on the screen, as the song “Doomed” by Moses Sumney (with echoes of jazz vocalist Nina Simone) plays in the background.  Near the ad’s conclusion, the company urges viewers to get involved by visiting PG.com/TakeOnRace. There are no moving images and the close-up shots of black and white faces and bodies provide impact.

The ad was developed by Gray and Cartwright, a new WPP agency.

“The Choice” joins “The Talk” (2017) and “The Look” (2019), which both won industry praise. The first addressed the need for black parents to warn their children about the brutal names they’ll be called and the danger they may be exposed to by some white people and some police officers. “The Look” shows how a black man is viewed with suspicion or worse while in the ordinary course of a day.

“The Choice” is aimed more at just getting well-meaning people to step up. It joins, along with the other ads, P&G’s sponsorship of a CBS News special about race in America earlier this week, and sponsorship of an Oprah Winfrey town hall special shown June 9 and 10 on her OWN network and 18 others operated by Discovery channels.

P&G also started the "Take On Race" Fund and kicked in $5 million to support established civil rights organizations and other smaller advocacy groups.

“We look forward to doing more in the weeks, months and years ahead,”a P&G blog says.“But it’s about much more than money. Our leaders are speaking up and speaking out on what we believe... And we’re using our position as a leading corporate citizen to convene others for a bigger, collective impact.”

P&G has been more outfront than most in the trend toward corporate stands on big issues. It has taken on other hard-edged messages in the recent past, and sometimes gotten bruised for it.

Gillette, a P&G brand, created controversy for itself with its “toxic masculinity” ad in January 2019, and another ad released in the weeks before Father’s Day last year depicting a father giving tips to his transgender son during his first attempt at shaving.

And just a couple months ago,  P&G was behind a fund-raiser for black victims of COVID-19. It debuted a short film, “Circumstances," that pointed out black Americans are up to 340% more likely to lose their lives to coronavirus because of their living conditions, employment and health care. “Viruses don’t discriminate,” the ad said. “But circumstances do.”