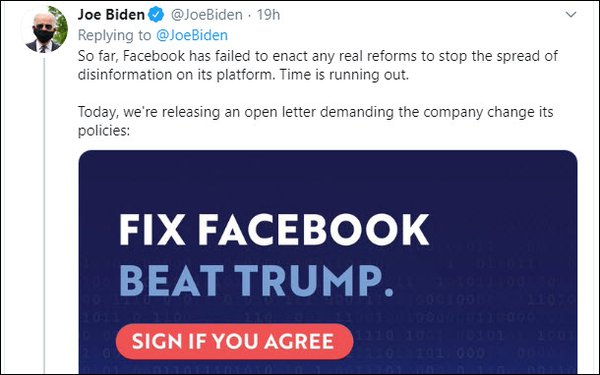 “With less than 150 days until Election Day, the stakes couldn’t be higher,” Biden tweeted on Thursday. “We’ve got to fix Facebook to protect our democracy and ensure fair elections. If you agree, sign the open letter today to demand Facebook take action. #MoveFastFixIt”

“Folks, we saw in 2016 what can happen when social media platforms are left unchecked and allow disinformation to run rampant. It puts the very integrity of our elections at risk,” he added. “We simply cannot let it happen again in 2020.”

The open letter/petition, posted on the Biden campaign site, points out that “After foreign operatives and rightwing trolls used Facebook to hack the 2016 election, Facebook vowed ‘never again’ and promised to take action. But with fewer than 5 months until the 2020 election, Facebook seems to be on a crash course to let the same mistakes happen again. Tens of millions of Americans rely on Facebook as a news source. But the company continues to amplify misinformation and lets candidates pay to target and confuse voters with lies. We have asked Facebook to take action–responsible action, action that is critical to the health of our democracy. And we will continue to do so. We will not stop.”

Specifically, Biden is demanding that Facebook promote only “authoritative and trustworthy” sources of election information, “rather than the rants of bad actors and conspiracy theorists”; promptly remove false, viral information; prevent political candidates and PACs from using paid advertising “to spread lies and misinformation, especially within two weeks of election day”; and establish clear rules, applied universally, “with no exceptions for the President —  that prohibit threats and lies about how to participate in the election.”

Facebook responded with a statement saying it will “protect political speech, even when we strongly disagree with it… We live in a democracy, where the elected officials decide the rules around campaigns. Two weeks ago the President of the United States issued an executive order directing Federal agencies to prevent social media sites from engaging in activities like fact-checking political statements.”

“This week, the Democratic candidate for President started a petition calling on us to do the exact opposite. Just as they have done with broadcast networks — where the U.S. government prohibits rejecting politicians’ campaign ads — the people’s elected representatives should set the rules, and we will follow them.”

Earlier this month, Facebook’s refusal to remove Trump’s threatening post about the racial injustice protests (“when the looting starts, the shooting starts”) caused some of its own employees to stage a virtual walkout and at least one resignation, and also triggered widespread criticism on social media.

Twitter did not remove the tweet, but appended a warning label to it that said it “glorifies violence.”

Twitter’s move to apply its standard policies to Trump’s tweets caused him to issue the executive order that Facebook is now using as another reason not to take action.