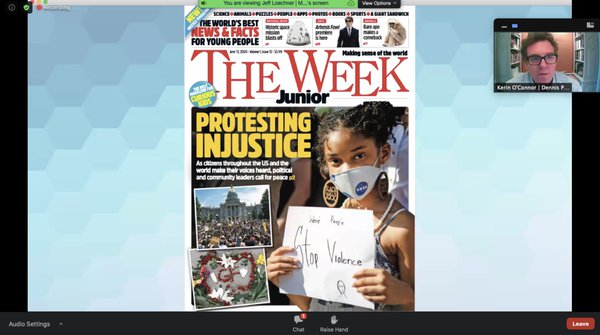 Somewhere in a U.S. warehouse there is a 10-foot-tall yellow mailbox, waiting to make its debut. Just as London-based Dennis Publishing was about to launch The Week Junior in the United States, COVID-19 reared its ugly head and all plans to distribute the weekly magazine for children shut down as well as the company's experiential marketing. Enter the mailbox — or not.

Kerin O'Connor, Chief Executive of The Week (inset, above), joined our Publishing Insider Summit from London on Friday to talk about how and why it decided to create a version of its The Weekly just for kids ages 8 to 14. "Age 8 or 9 is the pivot point, where children become interested in the world that is wider than their families," he said, adding frankly, "There is also a lot of money in it."

At about 9, kids become a reader for pleasure after picture books and chapter books. Up to now, print aimed at that age range had been mostly puzzles, "limp," he called it. Children are surrounded by people telling them what to do. Packed with editorial, The Weekly Junior is an "eyeball-to-eyeball conversation, a discovery, a partner to help them make sense of the world."

Dennis Publishing launched the product, which sells for about $6 an issue, in the UK in November 2016 and sells 100,000 copies per week. Then it turned its attention to the U.S. It chose 20 families, produced a dummy of The Week Junior and began to talk with families about how they felt about critical thinking, human rights, and the development of their children. They surveyed 4,000 families over 2.5 months.

There are 27.3 million children in the U.S. Children's titles are low compared to Europe, he said. The company developed clusters representing American families, with Prime at 26% representing those who trust the media becoming the core target. Following that were the Interested at 18% who are like Prime but do not trust the news. They want to maintain more control of their children.

O'Connor said they studied parenting styles of the UK vs. the U.S. and found the UK far more loose in terms of family, encouraging free thinking and more tolerant of poor behavior. In the U.S., children are seen as a reflection of the parents' aspirations.

The business model for The Week Junior is driven by subscription, and social media is "rapidly becoming our number one source for subscriptions, one-third of which is in California, especially in the Bay Area, which has many early search adopters.