Half Of Slate's Revenue Comes From Its Podcasts 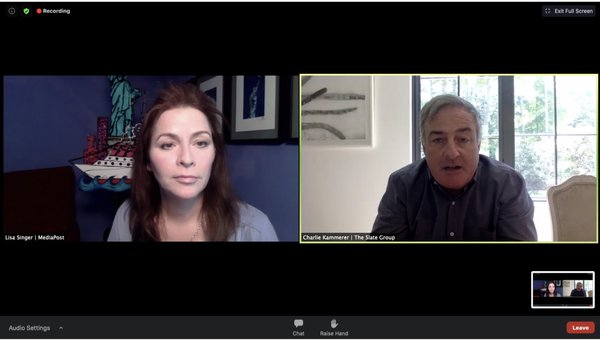 Fifty percent of revenue at The Slate Group comes from podcasts. Fifty percent! It's the No. 1 reason people subscribe to and pay for Slate.

That amazing factoid came from Slate CRO Charlie Kammerer (above, right) at our Publishing Insider Summit on Friday via Zoom. Of course, Slate has been podcasting for 15 years and it has "a recipe that we know works." (MediaPost's Lisa Singer, who interviewed him, is at left.)

"The essential mission of Slate is to help people understand what's important," he said. Since there has been a lot going on with the pandemic, Slate is seeing big increases in podcasting and web traffic.

"People trust us," Kammerer said by way of explanation. "Our scope of shows helped. Corona affected every part of people's lives. We have a parenting show. Economics and business shows. News shows." Slate is showing signs of strength in every segment, he said, with news leading. It grew 40% from Q4 to Q1 and saw bigger growth in April and May. The weakest segment is its culture show, he admitted, especially "What to Watch" because there is not a lot of new programming, not a lot to report on.

After advertisers decided to stay away from anything corona-related, Slate's audio business was affected and its digital business got event worse. But the brand saw its role in helping clients with their tone and messaging, "to get it authentic and right." It became aggressive in the marketplace as it showed clients how it could help them talk to our consumers and their constituents.

Programming didn't change much, Kammerer said. In Q4 last year, the company looked at data to see what works, what doesn't, and found that embedding certain podcasts in contextual content works. Slate's journalists on the written word and on podcasts work together "seamlessly. We are one newsroom with a group of editorial producers and content creators."

Just three weeks ago, Slate launched a new business show, "Thrilling Tales of Modern Capitalism," and on Wednesday last, it launched the fourth season of "Slow Burn," a look at white supremacist David Duke's rise to power and prominence 30 years ago. It is already the most successful first episode of the series, Kammerer said.