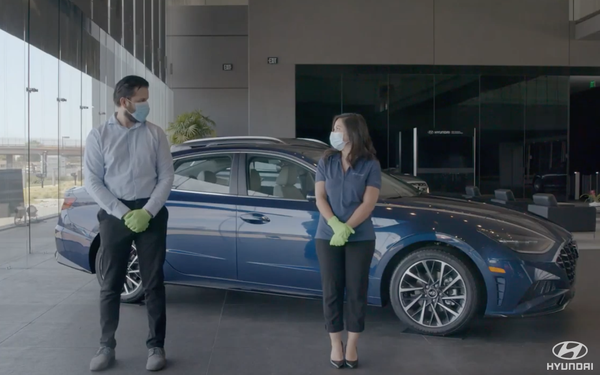 After several months of creative with a “we’re here for you” theme, automakers are gearing up for advertising that returns to a focus on moving metal.

Like all industries, automakers have pivoted these last few months in order to continue to create new ads. Due to COVID-19-related restrictions, Toyota adjusted its national advertising beginning in March to reflect changing consumer needs, ultimately creating three different campaigns.

The spots currently running feature footage of Toyota’s brand spokesperson, which she filmed at her home. The spots can be customized per federal, state, and local government guidelines to fit a variety of possible selling and service environments, coupled with footage shot prior to March this year.

Hollywood is resuming production, although productions are still subject to approval by public health officials, according to Angela Zepeda, Hyundai Motor America CMO.

“But we’re hoping to be able to start production on upcoming campaigns later this summer or early fall, while also planning for other scenarios,” Cavallucci tells DriveTime.

Legalities aside, there’s a lot to consider when putting together creative and the subsequent shoot for future automotive advertising with a pandemic that is or isn’t going away, depending on which article you read or whom you talk to.

Social distancing and masks are required or strongly encouraged, depending on the state, which could affect the creative.

“Subaru is a responsible company, so we want to be mindful of the state regulations and requirements for wearing masks, when and where it is necessary,”  Cavallucci says.“We are being very mindful of the current situation, and we’ve been carefully weighing all of the variables and our options.”

However, production sets themselves will require new protocols for safer filming, she says. Hollywood’s labor unions and the Alliance of Motion Picture and Television Producers have released a white paper of their recommendations on how to safely return to production.

Some of these recommendations are fewer fight and intimate scenes that require actors to be closer together, discouragement of live audiences, digital scripts, shorter work days, DIY costumes and makeup for some actors, and COVID-19 Compliance Officers on set.

"On our commercial shoots, we will take these guidelines into consideration as we are developing new creative concepts,” she says.

How about hand-shaking and hugging or crowd scenes? Are those banned from creative for the near future?

“We always want to ensure that our content is taking into consideration what is happening broadly in culture,” Zepeda says. “For example, we would use masks when the topic is related to the customer shopping and buying experience. The marketing message for each vehicle is tailored to the target audience and the key selling points we are trying to get across. If a storyline requires us to show social distancing, for instance, we would consider it, but it’s entirely dependent on the creative concept.”