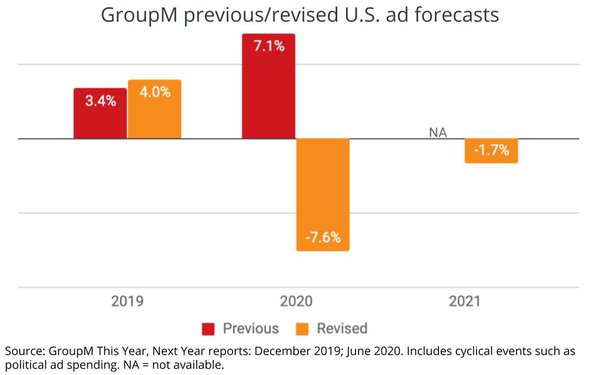 The estimates are for gross U.S. ad spending, including U.S. political ad spending, but if that is taken out of the equation, GroupM estimates the "normalized" effect will be a 13% decline in 2020 and a 4.2% growth in 2021.

Noting that multiple crises have contributed to what economists project will be the worst U.S. economic expansion since the Great Depression, GroupM analysts write in their just-released "This Year Next Year" mid-year U.S. ad report: "With this backdrop, excluding political advertising, we expect a 13% decline during 2020, followed by 4% growth next year on a comparable basis. Including political advertising, which we think will expand massively in 2020, the U.S. advertising market will fall by only 8% in 2020.

This will be followed by a further 1% decline in 2021 as underlying improvement is more than offset by a relative absence of political advertising activity next year.

"For context, a 13% decline would not be as bad as the 16% drop seen in the 2009 financial crisis. That we 'only' expect a 13% decline is surprising. We might normally expect that because the 2020 economic decline is so much worse than 2009, advertising should be much weaker. In nominal terms, GDP declined in 2009 by 1.8%; 2020 will probably fall by something closer to 4% on a comparable basis."