You Must Remember This: Never Forget Black Greats Of Film History 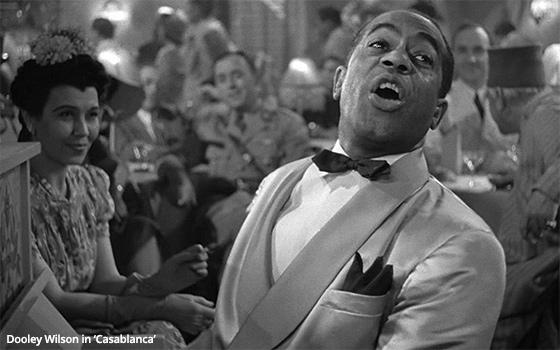 The two best-known performances by African-Americans in the movies of Hollywood’s so-called Golden Age would have to be Hattie McDaniel’s as Mammy in “Gone With the Wind” (1939) and Dooley Wilson’s as Sam the piano player in “Casablanca” (1942).

She won an Oscar -- the first ever for an African-American -- for the role of Mammy, an enslaved woman. Her achievement is tainted now by the prevailing contemporary opinion that the role was an unfortunate stereotype.

Wilson received no awards for the role of Sam in “Casablanca.” But as time has gone by, film historians have long observed that the role was unusual for its time.

Unlike Mammy and so many other roles for which African-Americans were more commonly cast in those days (maids, butlers, chauffeurs, chefs and the like), the Sam character was not a servant nor a second-class citizen to the movie’s main character, nightclub owner Richard Blaine (Humphrey Bogart).

Although Sam is clearly an employee of Rick’s, the two are positioned as close friends with a long history. Having said that, one jarring note in the movie comes when Ilsa Lund (Ingrid Bergman), who is also a long-time friend of Sam’s, refers to him as “boy.”

Sam and Mammy are two very different roles that came out of the same era of American film. Movies from that era happen to comprise the meat of the content lineup on Turner Classic Movies, where “Gone With the Wind” and “Casablanca” are seen often.

We are currently in the midst of a national conversation about the ways in which African Americans have been portrayed in our movies and on our grocery shelves.

Last week, “Gone With the Wind” was pulled from the new HBO Max streaming service because of the Mammy character and the other slave/servant characters in the movie.

This week, we are seeing a much-overdue reconsideration of Aunt Jemima, Uncle Ben and the Cream of Wheat chef who is sometimes referred to as “Rastus.”

All three should be sent to the junk heap of obsolete and offensive brand symbols. And on their way, they ought to stop off at the NFL and take the Redskins with them.

Although TCM is a member of the same WarnerMedia family as HBO Max, there has been no word on how “Gone With the Wind” will now be presented on the network -- if at all, how often, or under what circumstances.

This whole issue of African Americans in the movies presents a huge opportunity for TCM to take a leadership role in setting the record straight, and placing it in context, where the subject of movies and race (or ethnicity) is concerned.

To its credit, TCM already does this when it showcases movies with racial themes. In the current climate, however, it might seem prudent for TCM to simply weed out the movies that contain scenes or characters that some might deem offensive, and just not show them.

The TV Blog believes this is not the right thing to do. Burying history would not seem like the best way of dealing with it, learning from it, or preventing its repetition.

But even more than that, when we conceal these works of the past or otherwise remove them from circulation or display -- in effect censoring them -- I believe we do a disservice to the African-American performers who were in them, even as we acknowledge that they were ill-served by the industry that employed them.

Among other things, many of the African-American character actors of old movies were not credited. Today, we can make a much better effort, address this omission and give them the credit they are owed. We should know their names.

From my own long experience of observing the work of many of these greats since first seeing them in the old movies shown on television in my youth, here is a partial list of people who ought to have their own monument on Hollywood Boulevard: Hattie McDaniel, Dooley Wilson, Louise Beavers, Willie Best, Lincoln Perry (Stepin Fetchit), William “Buckwheat” Thomas, Stymie Beard, Allen Hoskins (“Farina”), Mantan Moreland, Dudley Dickerson, Fred “Snowflake” Toones, Charles R. Moore and heaven knows who else.

That happens to be the point: Heaven knows who they were, but what about the rest of us? We should all know who they were, and honor them by watching their work.

african american, television
1 comment about "You Must Remember This: Never Forget Black Greats Of Film History".
Check to receive email when comments are posted.
Next story loading