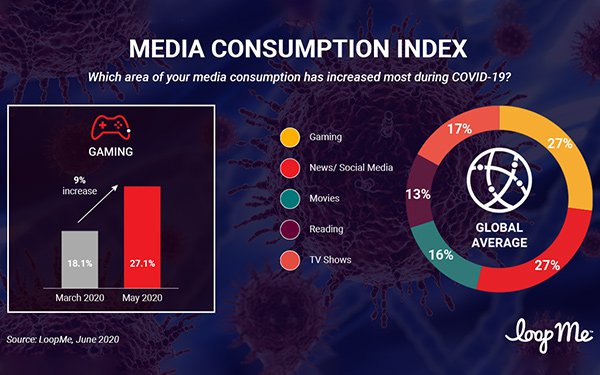 Americans (45%), Canadians (57%), and the British (59%) are the most excited about socializing with friends and family post COVID-19, while only 9% of Germans and 37% globally, express similar aspirations.

The survey finds people are spending less money but looking forward to enjoying post-pandemic activities. In addition to this social time, Americans are eager to travel (13%), dine out (12%), indulge in personal care (11%) and make a “big purchase” (3%). One in six (16%) indicate no big changes in their lifestyles.

Americans are proportionally split over their optimism regarding COVID-19. One in three say they are feeling positive, while an equal percentage are neutral (33%) and negative (33%). Consumers in Canada showed the highest levels of optimism at 46%, surpassing the global average by 13 percentage points. Italy (38%) and UK (37%) consumers expressed some of the lower levels of positivity.

Nearly three in 10 global consumers (27%) say they increased their gaming habits during COVID-19, though Americans lagged behind this global average at 22%. Compared to their global counterparts, Americans were more likely to watch TV shows (23% vs. 17%) and read news/use social media (28% vs. 27%). Americans watched fewer movies than those worldwide (14% vs. 16%) but both groups read books at similar percentages (13% each).

Similarly, Americans were less likely than consumers globally to increase their spending last month (21% vs. 25%). Over a third of those in Singapore (35%) hiked up their spending on total purchases, while 28% of UK residents indicated they opened up their pocketbooks.
The report surveyed 8,000 people in eight countries including the U.S., the U.K., Canada, Germany, France, Italy, Singapore and Hong Kong to measure consumer sentiment across four key indexes: media consumption, buying behavior, aspirational goals and overall outlook. The results were then compared to the pulse report released at the end of March 2020.
Here is a link to the report.