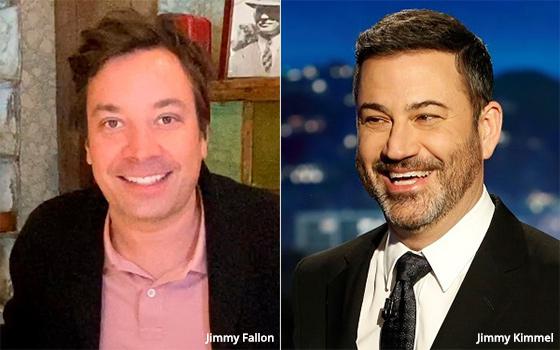 A lifetime of reading show business histories and as luck would have it, holding on to some of them, led me the other day to one of the best books on the subject that I still own.

The impetus was the topic of blackface. Curious to learn the origins and evolution of this peculiar form of entertainment, I turned to the book called No Applause -- Just Throw Money: The Book That Made Vaudeville Famous by the writer and historian known as Trav S.D., published in 2005.

The subject of blackface has come up because our two Jimmies of late-night -- ABC’s Kimmel and NBC’s Fallon -- have each been the target of blackface accusations recently.

The Fallon blackface revelation came to light late last month when someone unearthed a video clip from “Saturday Night Live” in 2000 in which Fallon was seen playing Chris Rock in a sketch.

To costume himself as the African-American comedian, Fallon had dark-skin makeup applied to his face, along with a fake goatee and a “textured” black hairpiece. The video is available for all to see on YouTube.

When the video began to circulate on social media, Fallon adopted the strategy of facing the issue head on and apologizing profusely. So he took to Twitter.

“In 2000, while on ‘SNL,’ I made a terrible decision to do an impersonation of Chris Rock while in blackface,” Fallon tweeted on May 26. “There is no excuse for this.

“I am very sorry for making this unquestionably offensive decision and thank all of you for holding me accountable,” he said.

Soon after, video clips surfaced of Kimmel playing two African-American celebrities in sketches that were seen on “The Man Show.” That was the show on Comedy Central that Kimmel co-hosted with Adam Carolla.

The sketches (both available on YouTube) had Kimmel playing NBA star Karl Malone in one of them, and Oprah Winfrey in the other. To play both characters, Kimmel wore skin-darkening makeup.

As of Monday morning, Kimmel had issued no apologies or statements on the blackface sketches.

But last Friday, he announced that he would be taking the entire summer off from his ABC show, citing the need for a lengthy rest period to reconnect with family and disconnect temporarily from the show he has hosted for 18 years.

The timing of the announcement had some observers suggesting that Kimmel is taking a sabbatical in the hopes that the blackface furor will simply die down and disappear in the interim.

Which brings us to the question of “blackface” generally. When I think of blackface, the image comes immediately to mind of White entertainers of the 19th and early 20th centuries cavorting onstage with darkly blackened faces and a clownish white outline around their mouths.

Trav S.D. and other historians trace the practice in America to an entertainer in the 1830s named T.D. Rice who darkened his face with burnt cork to do a song-and-dance impersonation of a crippled slave he once saw.

The dance and the song both came to be known by the name “Jim Crow,” which was later appropriated as the label for a hundred years of laws and societal customs aimed at segregating Americans of African descent from White ones.

That connection alone would seem to doom anyone who would consider donning dark makeup to play an African-American -- even if, like Kimmel and Fallon, the intent was likely not racist since there is little to suggest in either of their histories that they are racists.

Still, seeing these sketches that are 20-plus years old through the prism of today, they do seem shocking. They have a “what were they thinking?” quality.

One thing we can probably be sure of now is that neither the two Jimmies nor anyone else will ever attempt this again.

“Times change … and what offends us today about blackface [is] that it was a cruel and unfair misrepresentation of a group of Americans who were powerless to protest it,” wrote Trav S.D., whose book is full of details about the practice.

The author points out that the acceptance of blackface in any era depended on the way audiences reacted to it. In that respect, the message is clear today: The days of accepting blackface are over, no matter who is doing it.