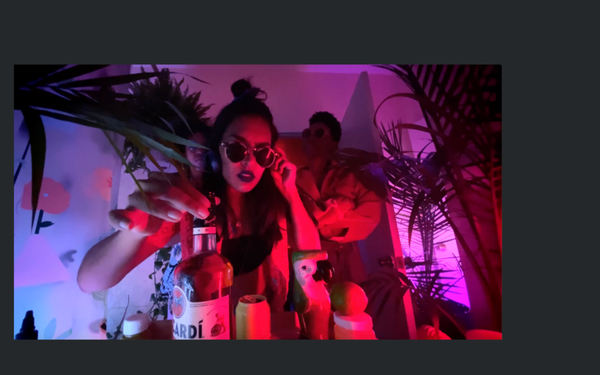 The idea of a commercial made only with smartphones or simple camera equipment is, during the pandemic, nothing new -- in fact, almost exactly the opposite.

Bacardi rum  added a couple twists to that concept for its 45-second digital spot. It was shot with iPhones and a Sony X9 video equipment while New York was in lockdown, but it wasn’t made by a professional crew. The pros just provided instruction via Zoom link-ups for the ad shot in a Brooklyn walk-up.

The ad features three real-life roommates who responded to a casting call ad, enlisted to hype Bacardi’s Superior white rum and its latest product, Bacardi Real Rum Cocktails in a can. But because there was no crew available in these socially distant times, the cast also made the ad in their own apartment. They coordinated the lights, dressed the set, did their   hair and wardrobe. They were the camera operators and cinematographers.

The ad itself is not so-earth shattering. The roommates -- Alina, Kiara and Raisa -- are shown doing what roommates do, with a Jamaica-flavored steel drum melody playing in the background.

They clown with each other, read, hang around in the kitchen, lodge themselves onto window sills, and watch the subway go by from the fire escape platform. Eventually, they’re on the roof dancing and partying to a backdrop of a New York skyline.

Perhaps more interesting, though, is a second video, about two minutes long, that Marketing Daily has been told will not be released on YouTube.

Too bad. It is a “making-of” film that shows how the BBDO New York agency and the production company 1stAveMachine arranged the shoot from a distance.

The three women received boxes and boxes of new set decorations, plants, cameras, tripods  and lighting -- all of which they lugged upstairs to their place, it seems.

Then, via Zoom, they learned how to restage the place from production designer Erin Beaupre, and learned at least the rudiments of how to use the camera  equipment and lights from Todd Martin, the director of photography.

With Zoom stage directions from Ryan Ramos, the first assistant director, and Tucker Bliss, the director,  the roommates do all the fun things three young women with Bacardi cocktail cans would be likely to do in their New York apartment -- as envisioned by a New York ad agency, anyway.

“After 30 hours on Zoom, 15 boxes of props, 2 days of filming, and zero people entering set,” a video graphic notes. “Bacardi can tell the world that wherever they’re spending lockdown, they can still do what moves them.”

Maybe. You get the idea when this was all over, Alina, Kiara and Raisa may have poured themselves a good stiff Bacardi cocktail and plopped onto the first available beds.

The filmmaker’s digital clapperboard indicates they were shooting at 4:10 pm on May 22 -- but still shooting at 4:46 am the next morning. It was a long day.