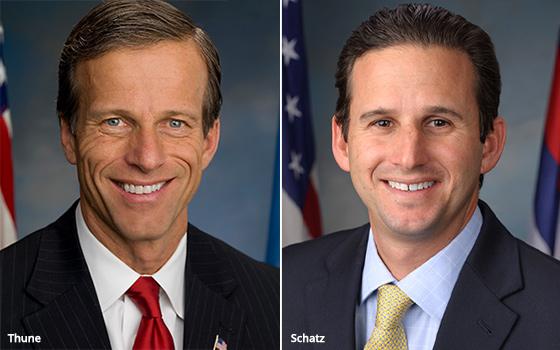 Two senators have introduced a bill that would require large online platforms to explain how they moderate content, and allow consumers to both initiate complaints about content and appeal decisions to remove material.

The Platform Accountability and Consumer Transparency Act, introduced Wednesday by Sens. Brian Schatz (D-Hawaii) and John Thune (R-South Dakota), would also require large web publishers to post quarterly reports about material that has been removed, demonetized or demoted. Twitter, Facebook, Google and other large web publishers would also have to create a system for processing complaints about content, notify users about decisions within 14 days, and allow consumers to appeal.

He says the web publishers, like offline publishers, have the First Amendment right to reject content without providing reasons.

"This law is structurally antithetical to the First Amendment," Goldman says.

The proposed bill would also revise Section 230 of the Communications Decency Act -- the 24-year-old law that protects web companies from liability for users' content.

Among other provisions, the new proposal would require large platforms to remove content that courts have determined is illegal within 24 hours. Section 230 currently protects companies from liability for many types of illegal content posted by users.

Some judges have said that protection also means companies can't be required to remove objectionable content. For instance, California's highest court ruled in 2018 that Yelp couldn't be required to take down reviews that a trial judge had ruled were defamatory.

The bill would also create a new exemption to Section 230 for federal civil laws, which would allow regulators to prosecute web companies for a broad array of unlawful activity by users. Currently, Section 230 has an exemption for federal criminal laws.

The measure comes as Section 230 is increasingly facing threats by politicians. Last month, President Trump issued an executive order that aims to task the FCC with creating regulations that would link companies' protections under the law with their content moderation policies.