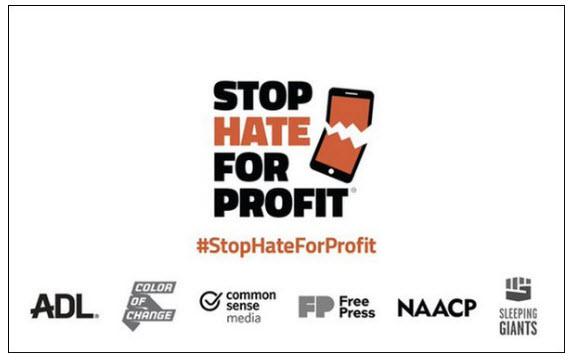 The company said it will pull ads on both Facebook and Instagram until the platforms’ parent company “can create an acceptable solution that makes us comfortable.”

Verizon spent $1.46 million in Facebook ads, and $406,600 on Instagram ads, between May 22 and June 30, according to Pathmatics estimates cited by CNBC.

The telecom’s announcement came after the Anti-Defamation League (ADL), one of the organizers of the #StopHateForProfit boycott launched last week, posted an open letter to companies that advertise on Facebook.

The letter elaborates on the boycott’s reasons for asking advertisers to pause Facebook advertising for the month of July, and links to a separate post that details specific instances of large brands’ ads appearing next to hate content.

The examples shown include a Verizon ad appearing next to a video from the right-wing conspiracy group QAnon that, writes ADL uses "hateful and antisemitic rhetoric, warning that the Federal Emergency Management Agency (FEMA) is planning to bring on civil war with concentration camps and coffins at the ready and claiming Americans are already quarantined in militarized districts.”

The full response statement from Verizon Chief Media Officer John Nitti stressed that Verizon has “strict content policies in place” and a “zero tolerance” policy. “When they are breached, we take action,” he said. “We’re pausing our advertising until Facebook can create an acceptable solution that makes us comfortable and is consistent with what we’ve done with YouTube and other partners.”

The ADL’s post also shows instances of ads from Geico, Airbnb, Pepco, Randstad, and Proctor & Gamble’s Febreze posted next to hate and conspiracy content on Facebook.

The open letter, signed by ADL CEO and National Director Jonathan A. Greenblatt, asserts that Facebook’s “hate speech, incitement, and misinformation policies are inequitable. Their harassment victim services are inadequate. Their advertising placement’s proximity to hateful content is haphazard. And their 'civil rights' audit transparency reports aren’t helpful to the civil rights community.

“Every day, we see ads from companies placed adjacent to hateful content, occupying the same space as extremist recruitment groups and harmful disinformation campaigns,” he continues. “Your ad buying dollars are being used by the platform to increase its dominance in the industry at the expense of vulnerable and marginalized communities who are often targets of hate groups on Facebook.”

After Verizon's announcement, Greenblatt tweeted to thank the company for pausing its ads, adding: "This is how we make real change."

While CEO Mark Zuckerberg and other senior-level Facebook Inc. executives have been trying to reassure advertisers in recent days, Global Business Group Vice President Carolyn Everson last weekend sent advertisers an email stating that the company does not make policy changes "tied to revenue pressure,” reports The Wall Street Journal. “We set our policies based on principles rather than business interests,” Everson added.

She also said that Facebook has committed to investing more in artificial intelligence and other efforts to detect and delete hate speech.  And she stressed that in the six months leading to March, 89% of content removed for violating the company’s hate-speech polices was detected by its own systems before any reports from outside. That’s up from 23% three years ago, she added.

In an email sent yesterday, Everson reiterated that Facebook supports brands that choose to boycott. “We respect any brand’s decision, and remain focused on the important work of removing hate speech and providing critical voting information,” she wrote, per WSJ. “Our conversations with marketers and civil rights organizations are about how, together, we can be a force for good.”

The report also notes that some ad buyers are making contingency plans in case their clients decide to pause their Facebook advertising.