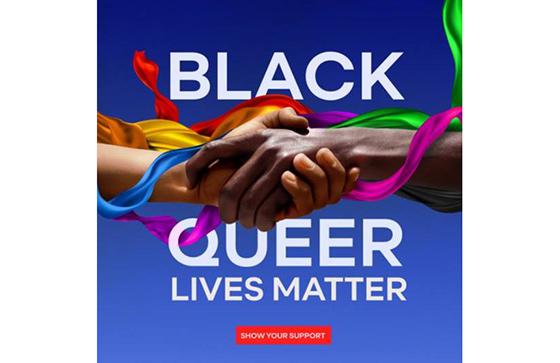 While some brands and agencies halted their annual LGBTQ+ initiatives in light of the current social climate and COVID-19 health crisis, several are moving forward with Pride-related activities.

Campari is supporting its SKYY Vodka brand with a new digital display campaign with a simple message: Black Trans Lives Matter that runs across Mindshare’s LGBTQ private marketplace (PMP). The illustrations were custom created by noted artist Fred Sands and direct viewers to The Marsha P. Johnson Institute, an organization dedicated to protecting the human rights of Black transgender people.

In addition, as part of a larger SKYY Pride initiative, the brand is continuing to sponsor the NYC and LA Pride Parade (despite their cancellations) and use these dollars to help create accessible/free engagements like the Human Rights Conference. Additionally, Pride uses sponsorship donations to assist local orgs that save and support queer lives, like the Princess Janae Place, Educational Alliance, and the Queer Detainee Empowerment Project.

Mindshare has actively worked to ensure its Pride support is not focused on a single month or specific to one brand through the development of its PMP which aggregates publishers into one negotiated inclusion list. Brands use their media dollars to support LGBTQ-specific and other publications. For instance, this latest SKYY digital campaign is running on sites likeThe Advocate, Conde Nast’s Them, BuzzFeed’s LGBTQ Page, and Slate’s LGBTQ content.

SKYY was the official launch brand for the PMP earlier this year though the platform was in soft launch in 2019.

This month the Financial Services team at Publicis Sapient announced it has spearheaded a partnership with Out Leadership, an LGBTQ+ business alliance, to make the company a member of its network. The relationship will ensure Sapient leaders make LGBTQ+ hires a priority and better help the agency build an inclusive leadership team. Only Publicis Sapient is joining this particular organization and not the broader Groupe network at this time.

Meanwhile, RPA capitalized on the trend of the moment for its Pride initiative by creating a collection of custom, colorful and cheeky Zoom backgrounds.

The agency partnered with production companies, including Psyop+Blacklist and Scholar, on the designs which are available at:

The creation of the Pride Zoom backgrounds is part of RPA Represent, an internal program that promotes creating a diverse and inclusive work culture.

The imre agency hosted a discussion with several “out” employees at the LGBTQ-founded marketing and branding agency to speak about their reasons behind how and why they decided to come out in the workplace. The event was then posted on the agency’s LinkedIn account.

Symetra teamed with agency Copacino Fujikado for a campaign to highlight the insurance brand’s diversity values. The company recently pledged $250,000 to the GSBA Scholarship Fund, one of the oldest LGBTQ+ scholarship programs in the country. The creative follows Women’s Soccer World Cup winner Megan Rapinoe and triple WNBA championship winner Sue Bird as this power couple tackles their disrupted lives at home.

Bird and Rapinoe shot all three spots in their apartment on an iPad and iPhone, with the spot’s director guiding them each step of the way. The ads are the first of three that the couple are scheduled to appear in for Symetra through 2021.

Bonobos tapped in-house designer and LGBTQ+ community member, Adam Dalton Blake, to transform the exterior windows of its NYC Fifth Avenue flagship into a mural depicting the LGBTQ+ community celebrating Pride from home that remains on display through July. The mural would have been widely viewed by parade goers had NYC’s iconic Pride Parade not been canceled this year due to COVID-19.

The menswear brand is also continuing its financial support of Callen-Lorde, an organization that provides healthcare and related services targeted to NYC’s LGBTQ+ communities, and launching a new partnership with Black Visions Collective, a nonprofit organization committed to a long-term vision that all Black lives matter and need to thrive.