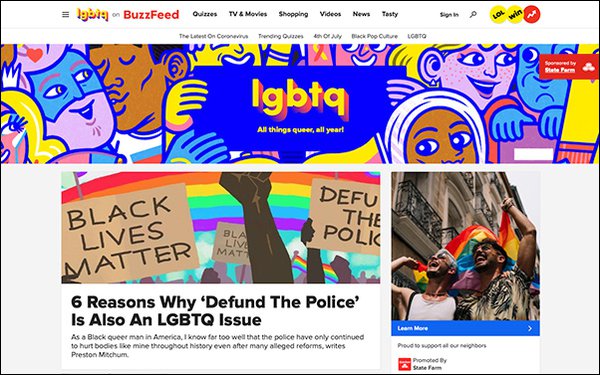 BuzzFeed is relaunching its LGBTQ vertical. Zach Stafford will be the inaugural editor-at-large.

BuzzFeed LGBTQ will be home to all BuzzFeed’s queer content, from across BuzzFeed.com and BuzzFeed News.

State Farm is the vertical’s title sponsor for its first month.

The mission of BuzzFeed LGBTQ “is to elevate new voices and curate content that highlights every aspect of queer life —  from the big stories to the small everyday moments, in Pride Month and year-round,” according to a spokesperson.

The vertical features stories like "6 Reasons Why ‘Defund The Police’ is Also an LGBTQ Issue," a story reporting on the Queer Liberation March to End Police Brutality this past weekend and product roundups from queer-owned businesses.

Zach Stafford was recently the co-host of BuzzFeed News’ live morning news show “AM to DM,” which ended in April. He was also the first Black editor-in-chief of LGBTQ magazine The Advocate.

BuzzFeed says Stafford is committed to amplifying Black queer voices and creating a space to tell their stories.

One out of every six BuzzFeed readers is LGBTQ, per the company.