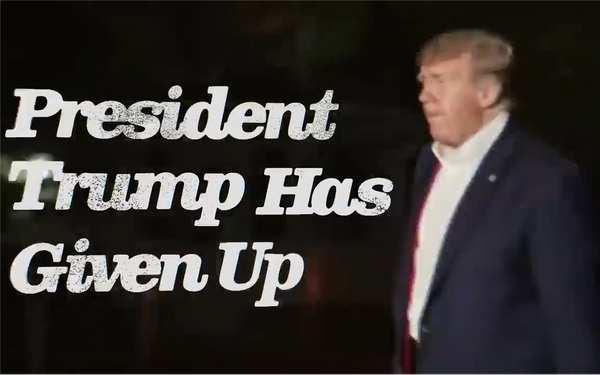 Caught in the midst of misinformation and boycotts by a slew of brands, Facebook has allowed a series of YouTube ads targeting Trump to run on its platform, while YouTube has given the baiting ads a home.

The ads take aim at what George Conway-backed Lincoln Project believes is the president's “personal insecurities in an effort to get under his skin.”
The series of ads apparently micro-target an extremely small demographic — U.S. President Donald Trump.

The organization, which is reportedly spending big bucks to run them, is looking to prove performance in November on Election Day.

The ads begin with a matter-of-opinion clickbait phrase in hopes that Trump will take the “bait” and erupt online, turning Republicans against him.

Messages include such propaganda as “President Trump Has Given Up” in hopes of getting others on board, but neither Facebook or YouTube have moved to remove them.

Propaganda is defined as spreading information, especially of a biased or misleading nature, used to promote or publicize a particular political cause or point of view. The messages are based on opinion.

The ads are spearheaded by the ironically named organization, The Lincoln Project. On board are several veteran GOP political strategists such as Steve Schmidt, John Weaver, Jennifer Horn and George Conway, the husband of counselor to the president Kellyanne Conway.

In a video, The Lincoln Project also targeted Trump’s rally in Tulsa, calling it a flop and inadvertently telling the world it is okay for teens to lie by reserving thousands of tickets for the Tulsa rally -- teens who had no intention of going. By reserving the tickets they inflated the expected audience.

Some call the ads by The Lincoln Project “propaganda.” Referring to the Tulsa rally, one person on Twitter wrote “10million+ watched online and there were thousands unable to get in the doors because of ANTIFA FACTS matter and being a spoilsport is really kind of childish.”

Some politicians like Alexandria Ocasio-Cortez applauded the teens for being deceitful, reportedly saying “you just got rocked by teens on TikTok.”

Other taglines for ads in the Lincoln Project include "Trump is not well." Another ad calls Trump "shaky" and "weak," claiming that the president "has trouble speaking, trouble walking."