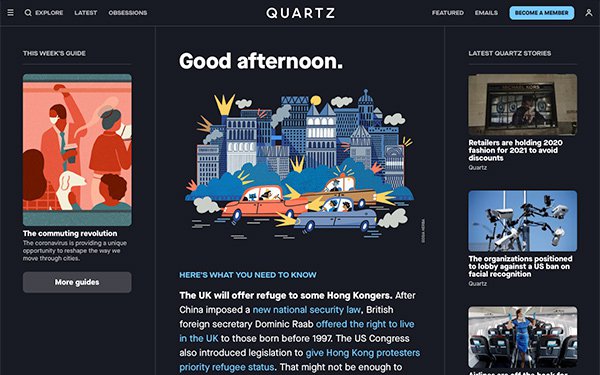 Quartz has launched a new homepage.

In a note introducing the look — available on qz.com and the iOS app — Quartz executive editor Kira Bindrim said the homepage draws inspiration from the publisher’s popular email newsletters, such as the “Quartz Daily Brief” and “Quartz Weekly Obsession.”

The feed-style homepage aims to offer “informative, concise and conversational rundowns” of news about the global economy.

It displays headlines, as well as reporting, quotes from experts, lists, charts and emojis.

Quartz surveys revealed readers were “inundated with information, short on time, low on trust, and eager to understand what’s important without feeling like you’ve got homework,” Bindrim wrote.

The homepage is a “sweet spot” of news delivery, “making you a little smarter about a lot of things while opening plenty of doors to learn more," she added.

The homepage is accessible to all readers, including those without a subscription.

Bindrim was named an executive editor in February. She was previously managing editor at Quartz.

Quartz last updated its homepage and iOS app in October.  A month later, the company announced it had nearly 11,000 paying members.