Sitting Through An Entire Episode Of This Is 'Brave' Indeed 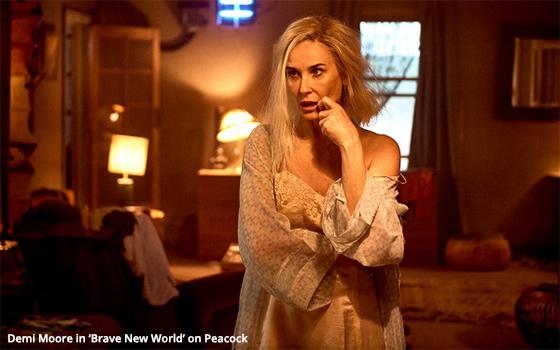 My hat is off to anyone who manages to make it through the entire 50 minutes of the first episode of “Brave New World.”

This is the new series adaptation of Aldous Huxley's 1932 novel that appears to be the centerpiece of next week's launch (on July 15) of Peacock, NBCUniversal's entry into the brave new world of subscription streaming.

The show is a high-gloss production that looks expensive. But it is all style and no substance.

In the long-ago dark ages when people actually cared about such things, movies with this much nudity and full-on sex earned restrictive ratings such as “R” or, even longer ago, “X.”

Not today, however. Today, TV companies think nothing of putting material like this on television without so much as a two-second warning.

If the sex scenes in “Brave New World” -- which arrive every four minutes or so -- serve the plot, then I did not stick around long enough to find out.

Suffice it to say that all the sex play is supposed to signal to us that the lives of these future-world residents are empty and emotionless.

To cope with lives that have been engineered to be problem-free, they partake liberally of a series of colored, mind-altering pills -- seemingly in the same absent-minded way that many of us eat M&Ms.

Of the many actors in the cast of this “Brave New World,” only two will be familiar to most -- Demi Moore, who must appear in the show some time after the 23-minute mark (which was as far as I got), and Jessica Browne Findlay, an actress who is best-known for playing Lady Sybil on “Downton Abbey.”

“Welcome to New London,” reads some words onscreen as the show begins. This is New London in England apparently, not Connecticut. “We have three rules. No privacy. No family. No monogamy. Everyone is very happy.”

Of course, they are not happy -- which helps to explain why they have become addicted to sex and pills.

I suppose I bailed before the first episode of “Brave New World” was over because the show itself was as empty and emotionless as the world it was depicting.

Worlds that are empty and emotionless are by definition dull indeed. And, as this new “Brave New World” demonstrates, so are TV shows.