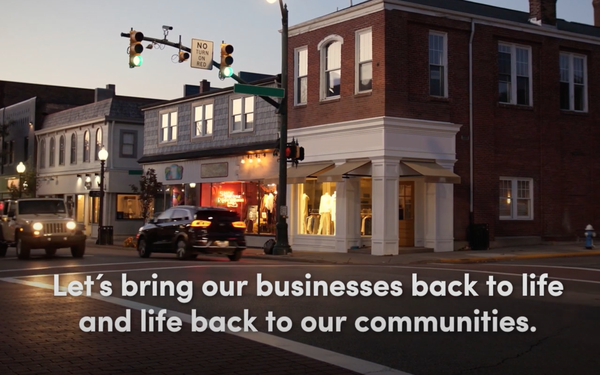 As COVID-19 cases surge in some areas and decline in others, reopening guidance for stores and shopping centers varies so widely that retailers are struggling. It’s hard to take the right precautions when there’s still disagreement about what those are.

Marketing Daily: Your latest research shows that right now, 51% of consumers say they’re not going to feel safe at brick-and-mortar stores until there is a COVID-19 vaccine.

Stephanie Cegielski: Yes, and only 24% are feeling better about the economy, a decline from our previous polling. That means stores are going to need more help.

There’s support in Congress to help stabilize the commercial-mortgage-backed securities market, which will provide some relief. But businesses across America need more assistance. Without it, many may disappear. And this spike we see in new cases is so concerning. It’s all tough for landlords, retailers and small businesses.

MD: You’ve also launched a new ad campaign called  “Back. Together.” Why?

Cegielski: We wanted to provide a marketing toolkit, which includes an Instagram video challenge for members that’s been getting a lot of traction, to help retailers communicate with one voice -- because it is pretty confusing.

Our research had been showing that most people were optimistic about the economy and eager to see things reopen if it was done safely.

People are social creatures, and we’re ready to get back. But even though we are finding fewer regional differences than we expected, we see more variation by type. For example, about half of people intend to keep supporting restaurants by getting takeout, but they’re not ready to dine in.

And they’re more interested in getting back to retail centers, and less in gyms, fitness centers and movie theaters.

MD: Can you clarify what it means when people say, “I want to go shopping”?

I know your data shows that about 57% are confident in the precautions stores and shopping centers are taking. But I live in a place where even though masks are required, many refuse to wear them, and stores don’t ask them to leave.

And the masks-versus-no-masks fights going viral are pretty terrifying.

Cegielski: Retailers are struggling. They want these safety protocols; they know many people aren’t going to come back to stores without them. But without a mandate, how do stores enforce them? National retailers have different challenges than local and regional stores.

And on top of that, there are videos of people going to bars, nightclubs and beaches with no masks. There’s a bit of a Wild West thing going on now.

MD: We’ve seen Apple close stores it had previously opened, citing safety concerns. Will we see more retailers use their own assessments, rather than government guidelines?

Cegielski: Yes, and we’ve already seen lots of that. In places where malls were allowed to reopen, like in North and South Carolina, for example, many retailers located in those malls opted to remain closed.

Each retailer is assessing the cost of implementing protocols as well as liabilities. And they’re thinking of employees as well as the general public.