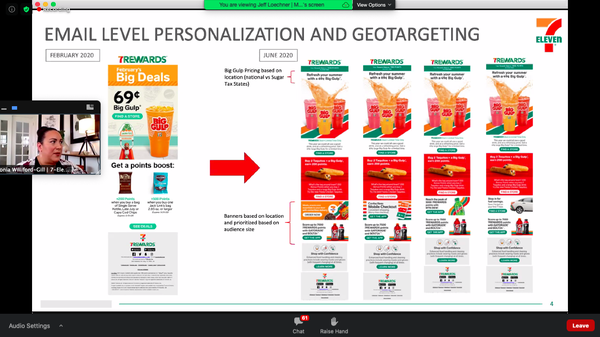 7-Eleven is everywhere, and that was the problem.

When COVID-19 hit in the late winter, the company ran up against city, county and state regulations that varied during the crisis and even more so during reopening that followed.

"It was really manual at first. The team was building out data extensions with ad hoc extensions. If midway through, we needed a new banner, we had to pull the data all over again. But the silver lining, and it was a thick one, is that it has given us the opportunity to have a conversation with technical team about how important it is to get the data in there.

"It truly pushed a way to evaluate how we were doing things before, which was more of a shotgun approach."

Going forward, Williford-Gill said, personalization and contextualized communication with customers will be part of 7-Eleven's program, and it will have segments "we can go back to, to power dynamic content."

Interestingly, when the crisis hit, the brand didn't want to drive traffic to its stores, so the conversation pivoted to delivery and ensuring customers that 7-Eleven was there for them.

Those early emails saw a 20%-25% open rate. The brand immediately moved away from making its communications about the fun part of going into the store and took on a more intentional tone about stocking, say, sneeze guards.