Caught On Camera: 'The Capture' Has Eye On Surveillance Culture 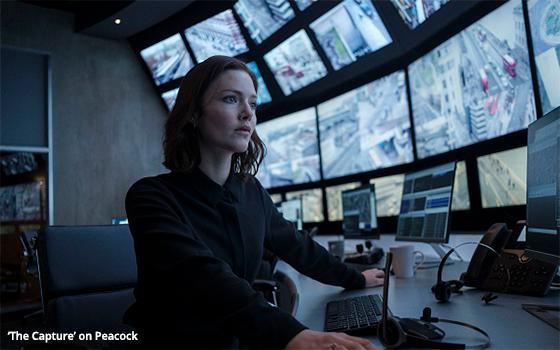 Contemporary police and terrorism thrillers from the U.K. have at least two things that their American counterparts do not: An emphasis on well-placed surveillance cameras, and British accents.

The former have emerged as an integral part of made-in-England TV procedurals that eventually turn up here on U.S. television.

While this kind of public surveillance architecture is proliferating here in America, it is apparently farther ahead in London, where it is well-established and pervasive, at least on TV.

According to a host of thriller series imported from the U.K. going back at least 15 years or so, London is pretty well-saturated with these all-seeing electronic eyes.

Indeed, the ubiquity of London’s surveillance-camera system is literally the subject and centerpiece of this new series from England called “The Capture,” premiering Wednesday (July 15) on NBCUniversal’s new Peacock streaming service launching that same day.

The title itself is a reference to the London surveillance network, which is breathlessly referred to in these kinds of series as CCTV (which stands for closed-circuit television).

“The Capture” refers to video captures -- broadly defined as whatever can be seen and recorded on the CCTV equipment.

In this case, the “capture” in question has to do with what the cameras did or did not see of an incident in which a British soldier in uniform may have attacked, kidnapped and possibly killed a female attorney on an empty London street in the middle of the night.

At first, the imagery captured by the CCTV cameras is straightforward. But another storyline already seen earlier in Episode One of “The Capture” has already tipped us off to the possibility that advanced technology is far from infallible. In fact, it is not only fallible, but also malleable.

This appears to be the lesson of “The Capture,” which is a much more worthy inaugural series for the new Peacock than its other high-profile drama, the woeful “Brave New World” reviewed here last week.

As for the British accents that come with any TV show imported from the U.K., some of the voices heard in the premiere episode of “The Capture” will take some getting accustomed to for American ears.

This tends to happen from time to time when watching the English TV shows. But where “The Capture” is concerned, the intelligibility of some of the voices is not an insurmountable obstacle to becoming engrossed in this show.

And here is another thing I’ve learned when encountering certain British accents on imported shows on PBS or BBC America: Turning up the volume doesn’t help.