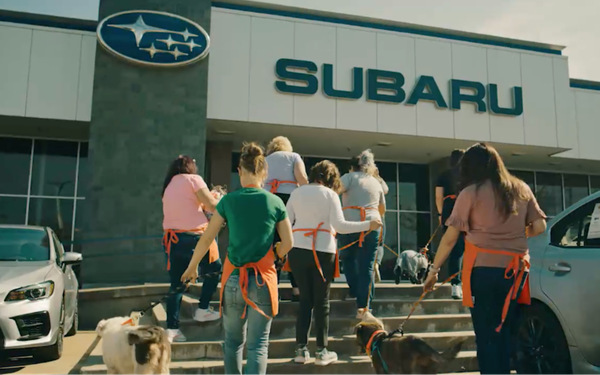 Subaru of America is launching a campaign with a new tagline tied to its signature “Subaru Loves Pets” initiative.

The 30-second spot from Carmichael Lynch breaks today on digital and cable and introduces the tagline, “Subaru: More Than a Car Company,” joining the automaker’s signature “Love” tagline.

Creative highlights the automaker’s years-long partnership with the ASPCA and the many ways Subaru has gone above and beyond caring for pets and the families who adopt them.

“For now, we are highlighting the Subaru Loves Pets initiative, highlighting how SOA and Subaru retailers have hosted adoption events, donated over $28 million to local animal shelters and helped over 230,000 pets,” Lee tells Marketing Daily. A long-form version of the spot will be available on You Tube in the coming weeks, she adds.

The ad will air through the end of August on national television as well as through digital and social platforms. The media buy includes “America’s Got Talent,” “Jimmy Kimmel Live” and “The Today Show.” It will also run across larger cable networks including Discovery, FX, HGTV  and USA.

The automaker wants a way to spotlight the Subaru Love Promise in action, which is why consumers will now see the new “More Than a Car Company” tagline within some spots, Lee says.

“Subaru is More Than a Car Company and our retailers are more than just a retailer,” Lee says. “The new Subaru Loves Pets creative is representative of just that. It is meant to showcase the efforts of many retailers and not just a specific one.”

The spot uses a story-telling, emotional approach that highlights the relationship Subaru’s retailers have with their community, as well as local shelters and rescues.

“Adoptions are great, but we are doing more than that,” Lee says. “in this spot, you see the pairing of an underdog with a special needs boy. They both needed each other, and Subaru Loves Pets helps to create relationships just like that.”