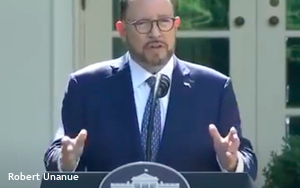 Reaction to GoyaFoods CEO Robert Unanue’s praise of President Donald Trump as “an incredible builder” at a White House Rose Garden ceremony Thursday has resulted in a mounting #Goyaway and #BoycottGoya boycott, as well as a backlash against the criticism by Trump partisans.

Unanue “was at the White House on Thursday to announce that the company would donate one million cans of chickpeas and another one million pounds of food to food banks in the United States as part of the Hispanic Prosperity Initiative, an executive order from Mr. Trump that was created to improve access to educational and economic opportunities,” Derrick Bryson Taylor writes  for The New York Times.

“Mr. Unanue’s comments drew swift condemnation on social media from people who were upset that a company whose products are popular among Latinos and others would so openly support a president who has vilified immigrants, especially those from Latin America, and whose harsh policies have targeted them,” Taylor adds.

“Fernando Ferrer, the former Bronx borough president and New York City mayoral candidate noted that, ‘Goya is a brand that was always synonymous with and harkened back to the days of Puerto Ricans and Cubans and even the earliest Dominicans coming to New York,’” Ray Sanchez writes  for CNN.

“‘Goya was it,” Ferrer, who is of Puerto Rican descent, tells Sanchez. “My wife is very brand loyal: ‘No. I only want Goya this. I only want Goya that.’ Now that makes it very, very difficult when a CEO does these things. But they've always had this tone deafness to their own community.”

“Goya Foods issued a statement later in the day that did not mention any of the hostility. Instead, an unrepentant Unanue repeated his backing of Mr. Trump's Hispanic Prosperity Initiative, established by executive order at the event,” Kate Gibson writes for CBS News.

“Unanue was more blunt on Fox News Friday morning, telling the conservative-leaning network: ‘I'm not apologizing.’ The calls for a boycott of his company's products were an attempt at ‘suppression of speech,’ he added,” Gibson continues.

“I'm not apologizing for saying -- and especially when you’re called by the president of the United States -- you’re gonna say, ‘no I’m sorry I’m busy no thank you?,’ Unanue said. ‘I didn’t say that to the Obamas and I didn’t say that to President Trump.’”

“Much of the press, meanwhile, treated the episode as if Mr. Unanue had broken some unspoken code -- the assumption being that all Hispanic Americans must hold the same, media-approved opinion of Donald Trump,” The Wall Street Journal editorial board posited yesterday.

“Mr. Unanue, whose family emigrated to the United States from Spain in the 1930s, reminded his critics that he had participated in similar events with Barack and Michelle Obama. His remarks to President Trump only appear partisan through the jaundiced lens of resistance progressivism: He was offering polite words of commendation to his host, the President of the United States. But such are the paranoid times in which we live,” it continued.

Meanwhile, “a number of prominent conservatives have offered their support for Goya,” Sam Dorman reports  for Fox News, citing tweets by  Sen. Ted Cruz (R-Texas), “The View” co-host Meghan McCain and commentator Charlie Kirk, among others.

“Actions of @GoyaFoods speak louder than the #woke mob. My people don’t get influenced by those that don’t know. They’ve been helping our people when we needed it most,” tweeted popular mixed martial arts fighter Jorge “Gamebred” Masvidal, Seth Cohen reports for Forbes.

Masvidal also linked “to a story about Goya donating a million pounds of food at the time of 2018’s deadly Hurricane Maria that devastated Puerto Rico,” Cohen adds.

“What has clearly emerged from this debacle is how the company has actually always been out of touch with the community it says it serves. To many, Goya is home -- part of a Puerto Rican or a Caribbean or a Latin American identity that has spanned generations. It is, at least in their marketing, the food of the ‘new arrival,’ trying to make it in a new country without losing the flavors of their heritage,” Julio Ricardo Varela, the co-host of the Webby-nominated In The Thick podcast, opines in NBC News’ “Think” section.

“The truth, of course, is somewhat more complicated: Goya sells ultra-cheap foodstuffs often filled with sodium and other preservatives, telling us, in effect, that our ‘heritage’ is chemicalized and dangerous, when little is further from the truth….”