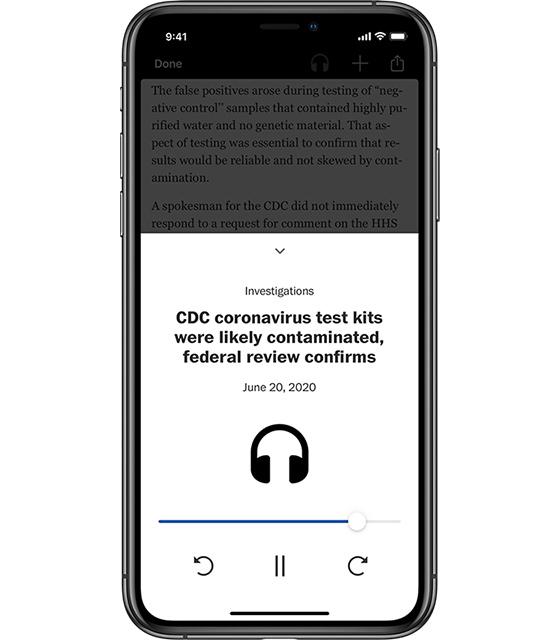 Audio versions of all Washington Post articles are now available on the Postapp for Android and iOS.

Using text-to-speech capabilities built into the Android and iOS operating systems, every Post native article now has an audio option, indicated by a headphones icon.

“When we first began testing audio articles on our Android app earlier this spring, our thinking was that this feature would appeal to readers during their commutes,” stated Leila Siddique, senior product manager at The Washington Post.

“We’ve been surprised and pleased to see steady adoption and use over the last month as many people continue to work from home.”

The trend is interesting, given that podcast listening has taken a dip since the pandemic began. That's likely due to the lack of commuting to and from work — a popular time to listen to podcasts for many — once offices shut down and people worked from home.

A report from eMarketer last month says that time spent with a podcast should dip to 34 minutes per day in 2020, from 36 minutes the year before.

“What we’ve learned from users is that they listen to the news while doing other things, and are consuming far more content than they would normally. We plan to continue iterating on the feature to provide the best quality experience,” Siddique stated.

The app update is available for download at the App Store, Google Play Store and Amazon App Store.

The Washington Post has been experimenting with audio articles since 2017.

In March,The New York Times acquired Audm, a subscription-based app that transforms long-form journalism into audio, and has been using the technology to convert some articles into audio.