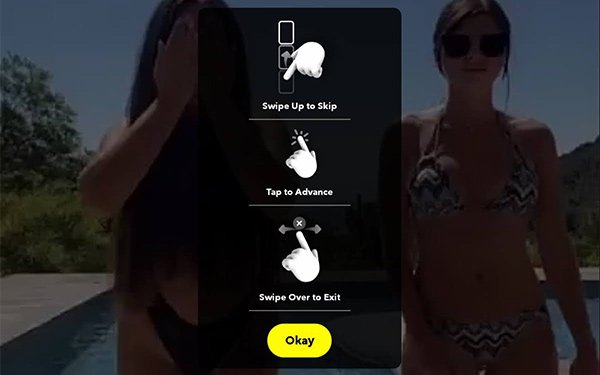 With TikTok’s fate increasingly in doubt, rivals are ramping up efforts to replace the video-sharing service.

Snap, for example, is now testing the same vertical-swiping feature that was popularized by TikTok.

First noticed by social-media consultant Matt Navarra and a Twitter user who goes by the handle @artb2668, Snap has since confirmed the “experiment.”

“We’re always experimenting with new ways to bring immersive and engaging content to our mobile-first Snapchat community,” a company spokesman said on Tuesday.

The appearance of the feature comes a week after Facebook announced plans to expand the availability of Instagram’s Reels, which, like TikTok, enables the creation of short video clips.

Among other countries, Facebook said it was pushing Reels into India, where TikTok was recently banned.

In addition to TikTok, India’s Ministry of Information Technology decided to outlaw 58 other apps of Chinese origin for threatening the “sovereignty and integrity” of the country.

The ban dealt a major blow to TikTok’s Beijing-based parent ByteDance, which had counted India as one of its most valuable markets.

As of April, approximately 30% of TikTok’s more than 2 billion users resided in India, according to estimates from Sensor Tower.

Also, TikTok is falling out of favor with a growing number of U.S. policymakers, business executives, and organization heads.

Like those in other countries, U.S. officials have cast TikTok as a potential threat to national security.

U.S. Secretary of State Mike Pompeo recently said during an interview with Fox News that he was “looking at” a nationwide TikTok ban. ByteDance seemed to respond to Pompeo’s threat by pulling the app out of Hong Kong.

Weighing in on his industry newsletter, independent tech analyst Ben Thompson now considers a U.S. ban of TikTok to be “seemingly inevitability.”