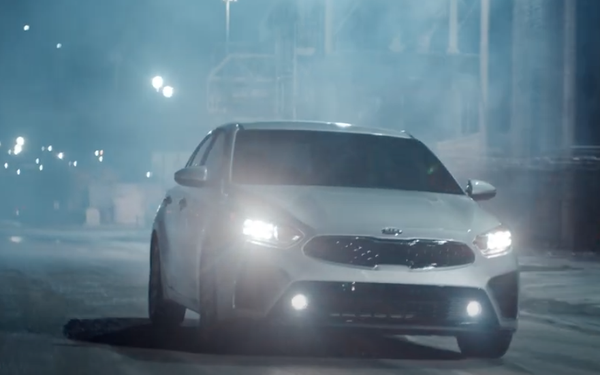 With many theaters closed nationwide this summer due to the pandemic, Kia Motors America is taking pity on movie-starved consumers.

The automaker enlisted AOR David&Goliath to create “The Features Film,” a longform spot with the feel of a big screen blockbuster action movie.

The film is divided into a series of 13 individual 15-second pre-roll videos and is also available as a six-minute longform film,  with a 30-second trailer and 60-second teaser as well.

The thriller aims to blur the line between automotive content and Hollywood storytelling and weaves the brands’ design, technology, capability and safety features into the plot line.

“The Features Film" follows the story of a young man who got mixed up with the wrong crowd, eventually becoming a getaway driver for the Mafia. Unfolding over the course of one night, the hero enlists eight Kia models -- Forte, Soul, Stinger, Niro EV, Niro HEV, Seltos, Sportage and Sorento -- to help him break free from the seedy underworld and turn his life around.

With many automakers offering the same or similar vehicle options, the film is a way to differentiate the brand and reach consumers directly with highly creative content, says Russell Wager, director, marketing operations, Kia Motors America.

The aim is to make the feature-demo videos engaging, while educating potential shoppers.

The convention has always been to highlight car features in a way that tells a compelling story, says David Angelo, founder and creative chairman of David&Goliath.

“In many cases, the car feature becomes so dominating that it overshadows the story and diminishes the impact of the concept," Angelo says. "So we turned this convention on its head and created an entire idea where not one, but 13 features would be ‘featured' in a highly watchable film that not only demonstrates capability, but also makes them the captivating lead ‘actors’ of the film.”