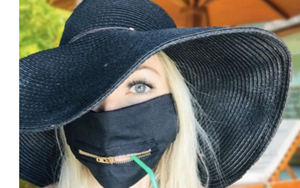 Well, they laughed at Edison, too.

According to the Financial Times, the maker of brands like Jim Beam, Maker’s Mark, Courvoisier and many others has assigned its top managers to come up with a drinking helmet or some kind of head covering  “that will keep drinkers safe while recapturing the pre-coronavirus experience of a fun night out.”

Though this may sound more like an idea hatched the day after a fun night out than a real project, Japan-based Suntory is serious about the helmet. The pandemic has rocked the beer, wine and spirits world, with many bars and restaurants closed as drinkers decide it’s better to be safe than be hit by spit. And like a hangover, this headache is not going away so fast.

Research firm IWSR predicts the liquor industry won’t recover from the pandemic until at least 2024. One third of liquor sales come from bars, restaurants and stadiums, so any bright ideas should be welcome throughout the industry.

Suntory is the world’s third-largest spirits maker, which operates as Beam-Suntory in the U.S. Its CEO, Takeshi Niinami told the paper about the project while admitting that the idea sounds far-fetched.

The company has some helmet prototypes, Financial Times reports.  One looks like an astronaut’s helmet. Another looks like a sun visor. None look good enough that the  company wanted to release photos.

“It looks weird, but being weird may be acceptable in the new normal,” Niinami said.

Suntory is not alone in its efforts to solve its drinking problem. Several entrepreneurs have already marketed their mask solutions. They might make drinking possible, but might not be so hot for controlling germs.

“Once it became clear that we were going to occupy this socially distanced space for a while, it was only inevitable that the devolution would travel further down the path to perdition,” reported the wry online publication NeatPour.com, reporting on drink-friendly masks.

Etsy.com features pages and pages of masks with flaps or drinking holes for straws, and several examples of masks that include a zipper.  “It may not be a state-of-art technology, but we have to think outside the box,” Nimani told the Financial Times.