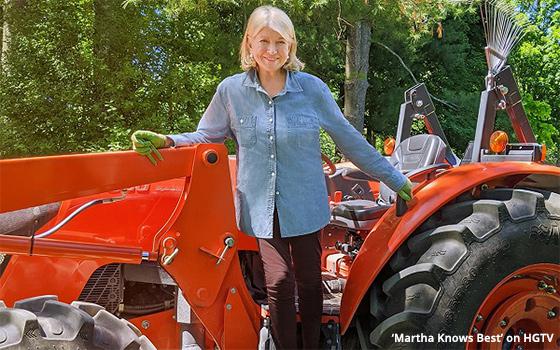 Once upon a time, it was “Father Knows Best,” then decades later it was “Chrisley Knows Best” (a TV show about a man named Chrisley and his family on USA Network), and now it’s “Martha Knows Best.”

So of the three, who knows best? My money is on the third one because the Martha in the title is Martha Stewart.

And when it comes to so many things -- cooking, baking, homemaking, catering, holiday handicrafting and operating heavy machinery (see photo above) -- she does indeed know best.

In her new show premiering this coming Friday on HGTV, Martha demonstrates that she knows what's best when it comes to gardening.

This garden-focused show, filmed at her sprawling farm in the New York City suburb of Bedford, N.Y., apparently grew out of the pandemic.

As Martha states in the premiere, she has spent more time at this particular home this year than she usually does due to COVID-19 and its restrictions on travel (among other activities).

Thus, production of the show has taken place entirely in the time frame of the pandemic lockdown that began in March.

She does not mention that she is, in fact, 78, which is another reason for Martha Stewart -- or anyone of a certain age -- to stay home at this time.

On the show, a very spry Martha is seen in outdoor working togs turning over soil, feeding chickens and giving a running commentary on the workings of her suburban farm.

The show has a “you can do it too” kind of feel to it, although it is also abundantly clear that few of those who will watch this show will be in any position to command the same kinds of resources that Martha can.

For example, this particular home and grounds are apparently so large that when the pandemic lockdown began, Martha was able to persuade her full household and garden staff to move in temporarily and live there for the duration of the shutdown.

This would present difficulties for most of us, but not for her.

In Episode One, she also relates how she buys her garden's vegetable seeds every year: She flies to Paris to buy them. Perhaps she is unaware that her home is less than 15 miles away from at least five Home Depots (I looked it up, as a service to her).

But she's the boss, and if she prefers French seed packets to American ones, then more power to her. “The first thing I do when I go to Paris [is] I don't go to Dior or Chanel,” she says on the show. “I go to the Île de la Cité and buy my seeds for the rest of the year.”

I think she speaks for us all when she says, “I love those seed shops on the Île de la Cité!” Mais oui!

During the show, Martha takes facetime calls from home gardeners in need of her advice. And she provides tips and pointers from her years of experience that do not involve hopping on a plane to France.

The fact is, this show is one of the brightest new entries to come along on HGTV in many years. One reason is that it is not at all similar to the network's other shows.

For one thing, it is about gardening, which is a part of the network’s acronym (Home & Garden Television) that is underserved. Another difference is that almost all of HGTV’s other personalities start out their careers on the network as unknowns.

By contrast, Martha comes to HGTV as an already established star in the home-and-garden space. As a result, we do not have to spend any time getting to know her at all.

With Martha Stewart, what you see is what you get. Oh, and that includes 17 pet peacocks.