It's Netflix Vs. HBO In Annual Emmy Numbers Game 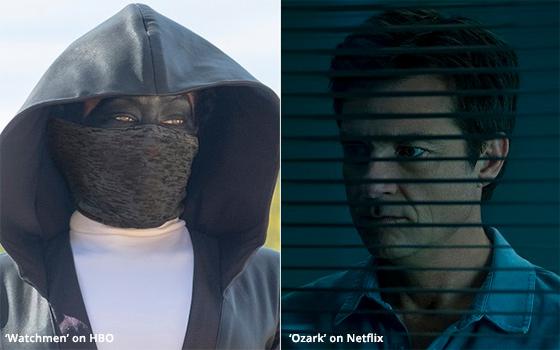 If the annual Emmy nominations every summer were a sporting event, they would require a scoreboard of unprecedented dimensions to display all of the numbers.

For that is what the Emmys have become -- a numbers game.

This is due mainly to the explosion in the number of platforms and content providers that have emerged over the last 5-10 years.

The increase in content has grown proportionally, and so have the number of Emmy nominations that are divvied up and handed out every July among all of the celestial bodies in this vast TV universe.

Not lost on many observers is that the Emmys have emerged in recent years as a clash of titans in subscription-based video-on-demand.

This summer’s nominations, released earlier this week, are no exception. Once again, Netflix and HBO top the list of networks/streaming services in total nominations.

HBO had a total of 107 nominations based on 26 nominations for “Watchmen” (the most of any single TV show this year), 18 for “Succession,” 11 for “Westworld,” nine for “Last Week Tonight with John Oliver,” eight for “Insecure” and other various nominations and shows.

For HBO, the gap of 53 between Netflix’s Emmy tally and its own may have some meaning. But for the most part, both of them were far ahead of any other network or streaming service in the “total nominations” category.

For the record, HBO outpaced Netflix a year earlier -- 137 to 118, respectively.

One of the phenomena of the Emmys that has been observed by many over the last few years is the way the pay services now significantly outpace the commercial-supported broadcast networks in total nominations.

This leaves the networks in the awkward position of airing an annual Emmy show every September that, at least in part, serves as a prime-time promotion platform for competitors that are all responsible for the slow but steady erosion of the audience for network television.

This year’s Emmy Awards telecast is scheduled for September 20 on ABC, hosted by Jimmy Kimmel. There is no word yet on how the show will be produced -- either in-person with a socially distanced audience, or with Kimmel in pajamas hosting from his family room.

CBS had 23 nominations this year, down significantly from 43 a year earlier. Among the CBS shows with multiple nominations this year were: “The 62nd Grammy Awards” with four, “The Late Show With Stephen Colbert” with three, “The 73rd Annual Tony Awards” with three and “Star Trek: Picard” with five -- which is interesting because “Picard” is a streaming series on CBS All Access, not the CBS network.

Of the broadcast networks, Fox brings up the rear with just 15 nominations, including four for this year’s Super Bowl halftime show with Jennifer Lopez and Shakira, three for “So You Think You Can Dance” and three for “The Simpsons.”

Two of those for “The Simpsons” were for voiceover characterizations. This is ironic, since the show has been forced to weather a storm of criticism over voice characterizations such as Hank Azaria’s long-time voicing of Apu, the Indian who runs the Kwik-E-Mart convenience store.

Fox’s 15 nominations were one less than the 16 that were earned by the obscure Pop network -- whose original comedy series “Schitt’s Creek” emerged as one of the year’s most-nominated shows with 15.

Pop’s other nomination was for “One Day at a Time,” which happens to be the only other original show this network has (and it is not so much “original” as a reboot of the old 1970s series of the same name).

The Emmy nominations now are so numerous that in order to accommodate all of them, the TV Academy this week posted 13 or more separate PDF documents of lists, facts and figures on its website, Emmys.com.

In the end, the long lists make the Emmys feel like a kids’ sports league -- everyone gets a trophy.