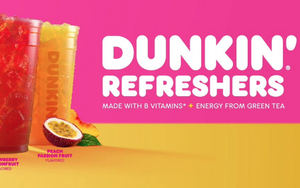 With morning work commutes largely on hold, a menu reshuffle at Dunkin’ that plays to midday taste preferences has produced the chain’s biggest new product introduction in four years, in the form of Dunkin’ Refreshers beverages.

In addition to shifting the timing of morning store visits from 6 a.m.-9 a.m. to 10 a.m.-2 p.m.., the pandemic has prompted an ever-evolving recast of Dunkin’s e-gift card offering via the April launch of the dedicated website DunkinCoffeeBreak.com.

Dunkin’ Refreshers were introduced at participating locations on June 17 with a special price of $2 through July 28.

“Dunkin Refreshers have been our most successful new product offering since Cold Brew in 2016, and they also appeal to an afternoon customer looking for a pick-me-up.”

Sales appear to be “largely incremental,” Murphy added. “A significant portion of our loyalty guests who bought Dunkin’ Refreshers have continued purchasing their regular beverages, in addition to this new product.”

Loyalty guests are a reference to members of DD Perks. Starting Aug. 3 and for a limited time on Mondays, they will be eligible for a free medium cup of hot or iced coffee with the purchase of a food item.

In a similar vein, Dunkin’ will bring back Free Donut Fridays for a limited time—a program that first ran from March through May—with the purchase of a beverage.

The QSR chain has long sold e-gift cards, but they were “leveraged mostly around the holidays, with a buy-one, get-one focus,” Dunkin’ Brands vice president of brand stewardship Drayton Martin tells Marketing Daily. “Gift cards were a little bit of an afterthought.”

When COVID-19 began to prompt lockdowns four months ago, Dunkin’ saw the opportunity to “reimagine” e-gift cards—which can be sent via email to recipients, who then print and redeem them.

Working with BBDO New York and Blackhawk Network, in about two weeks the chain created DunkinCoffeeBreak.com. After its April 9 launch, e-gift cards were promoted as a way for people to reward essential workers.

“It took off,” says Martin.

The new site was subsequently revamped to encourage e-gift card givers to recognize nurses, teachers, everyday “heroes,” and school graduates, among others.

The back-to-school season will bring the next iteration of e-gift card recipients—for example, teachers, students and parents who are “busy being teachers at home,” says Martin.

For every e-gift card purchased, Dunkin’ donates $1 to the Dunkin’ Joy in Childhood Foundation, which serves “sick and hungry kids, particularly in underserved communities.”

On the conference call with financial analysts, Dunkin’ Brands CEO David Hoffmann was asked about plans for TV advertising over the next six to 12 months for the Dunkin’ brand. He said things will be “a little quieter” in the third quarter.

In the fourth quarter, the return on TV ad spending during an election year “isn’t that great in that October period," he said. "So you could probably see us go a little bit darker, but that’s more because of the cost of the weight and getting bumped rather than TV not being effective.

“I think [it's] smart media management by our team.”